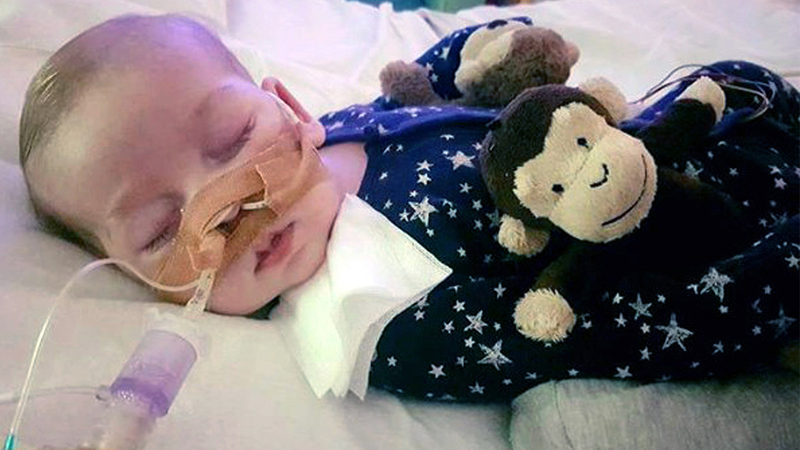 NEW YORK -- A British court on Monday gave the parents of 11-month-old Charlie Gard a chance to present fresh evidence that their terminally ill son should receive experimental treatment.

The decision came after an emotionally charged hearing in the wrenching case, during which Gard's mother wept in frustration and his father yelled at a lawyer.

Judge Nicholas Francis gave the couple until Wednesday afternoon to present the evidence and set a new hearing for Thursday in a case that has drawn international attention.

But the judge insisted there had to be "new and powerful" evidence to reverse earlier rulings that barred Charlie from traveling abroad for treatment and authorized London's Great Ormond Street Hospital to take him off life support.

"There is not a person alive who would not want to save Charlie," Francis said. "If there is new evidence I will hear it."

Charlie suffers from mitochondrial depletion syndrome, a rare genetic disease that has left him brain damaged and unable to breathe unaided. His parents want to bring him abroad for experimental therapy, which they say offers their son a chance of improvement.

But British and European courts have sided with the hospital's decision that the 11-month-old's life support should end, saying therapy would not help and would cause more suffering.

The re-opening of the case at London's High Court may allow Charlie to receive the experimental treatment at his current hospital or abroad.

Great Ormond Street Hospital applied for another court hearing because of "new evidence relating to potential treatment for his condition."

The evidence came from researchers at the Vatican's children's hospital and another facility outside of Britain.

The application came after both Pope Francis and President Donald Trump fueled international attention to the case, with hospitals in Rome and the U.S. offering to provide Charlie the experimental therapy.

The case pits the rights of parents to decide what's best for their children against the authorities with responsibility for ensuring that people who can't speak for themselves receive the most appropriate care.

Under British law, it is normal for courts to intervene when parents and doctors disagree on the treatment of a child - such as cases where a parent's religious beliefs prohibit blood transfusions. The rights of the child take primacy, rather than the rights of parents to make the call.

Charlie's parents, Chris Gard and Connie Yates, have received wide public support, while right-to-life groups have intervened in their cause. Americans United for Life chief executive Catherine Glenn Foster was in London on Monday to support the couple.

"Today is a victory for poor Charlie and Chris and Connie over Great Ormond Street Hospital," Glenn said after the judge ruled. "There is a tremendous amount of hope here."

A petition supporting Charlie's right to treatment has garnered around 350,000 signatures and more than 1.3 million pounds ($1.7 million) have been raised online for his case.

Charlie's parents were overcome with emotion during Monday's hearing. At one point, the baby's father, Chris Gard, yelled at a barrister representing the hospital: "When are you going to start telling the truth?"

"He is our son. Please listen to us," she said.

Francis - who also ruled on an earlier chapter in the case - said everyone involved in the case wanted the best for Charlie. He rejected an attempt by the child's parents to have another judge hear the new evidence.

Before Monday's hearing, Connie Yates told Sky News that she wanted judges to listen to experts on her son's condition who say the treatment might help.

The mother said seven specialists from around the world have expressed support for continued treatment and told her it has an "up to 10 percent chance of working."

"I hope they can see there is more of a chance than previously thought and hope they trust us as parents and trust the other doctors," she said.
Report a correction or typo
Related topics:
health & fitnessnew york citymitochondrial depletion syndromecharlie gardnew york presbyterian hospital
Copyright © 2022 by The Associated Press. All Rights Reserved.
TOP STORIES
Flight delays ease up amid chaotic 4th of July weekend travel
1 killed, several injured in shooting at mechanic shop in NYC
Ex-boyfriend arraigned in murder of Upper East Side mom
AccuWeather: Less humid
Good Samaritan tries to save man seen jumping in Hudson River
Man found at Taylor Swift properties in NY faces stalking charges
Hard Rock deal ends casino strike threat in Atlantic City
Show More
Smoky 4-alarm fire breaks out in New Jersey building
Man shot in the head while riding scooter in the Bronx
3-year-old boy dies after falling from 29th-floor balcony in Manhattan
Where to watch 2022 Fourth of July fireworks
Macy's 4th of July Fireworks 2022: Everything to know
More TOP STORIES News