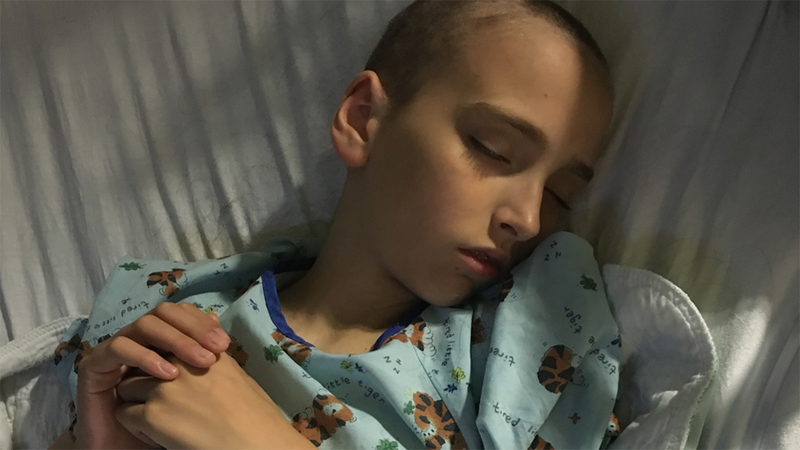 MINEOLA, Long Island (WABC) -- A mother on Long Island is fighting to have her son removed from chemotherapy treatment after he was given a clean bill of health by doctors.

Gundersen of Huntington said Nick was diagnosed by doctors at Cohen Children's Medical Center with acute leukemia in June 2018. Gundersen said she asked doctors if she could get a second opinion before Nick began chemotherapy on June 30th.

"They told me if I didn't consent to the treatment they would call CPS and have me removed and my son would have the treatment anyway," Gundersen said. "So I signed the consent."

Gundersen, who's a holistic wellness coach, said Nick was hospitalized for 30 days and suffered an adverse reaction to the chemotherapy.

"He lost over 20 percent of his body weight. He developed typhlitis, which is a life-threatening bowel infection, he had fluid in both his lungs, he was bedridden. He stopped breathing on numerous occasions, he was on oxygen," she said.

He was discharged on July 24 and continued with outpatient appointments until August 29th. On August 29th, doctors tried to admit Nick but his mother refused. A doctor there called CPS. Cohen Children's Medical Center did not return Eyewitness News' request for comment.

On September 2, Gundersen said police officers and CPS showed up at her house at 3:30 a.m. and seized Nick and forced him to return to Cohen. On September 11th, Gundersen had Nick transferred to NYU Winthrop Hospital in Mineola, where he continued with chemotherapy.

In mid-October, doctors at NYU Winthrop gave Nick a clean bill of health and said the cancer was gone, but informed the family that Nick would need three years of chemotherapy, which is considered the standard of care. Gundersen refused, opting for her son to have what she called non-toxic preventative treatments which keep the cancer in remission.

"I want him to have a long healthy life and I want him to have that opportunity. If he is forced to do this chemotherapy treatment for the next three years that's not what will happen," she said. "I feel we should be allowed to have choices especially when they're less toxic"

On October 14, Gundersen took Nick to Florida to meet with a group of doctors for the preventative therapies. When Nick did not return to NYU Winthrop for chemotherapy on October 15th, CPS called Gundersen.

CPS brought an emergency removal proceeding on October 19th to seize control of Nick. Dr. Mark Weinblatt of NYU Winthrop testified a week later before a Suffolk County family court judge that Nick was in imminent danger of death. On October 26, the judge granted custody of Nick to CPS and ordered him back to Suffolk County. Nick left Florida and was admitted on October 30 to NYU Winthrop.

Nick told Eyewitness News reporter Kristin Thorne during a FaceTime conversation Friday from his hospital bed at NYU Winthrop that he is upset with CPS.

"They basically took me away from my parents and that's unnecessary because they're trying to help me and they're not trying to kill me. I think that they should focus on other families that actually need help and whose children lives are actually in danger," he said.

Nick said he does not want to receive chemotherapy because he doesn't have cancer.

"It makes me feel not good at all. I'd rather do something that makes me feel good and that helps me," he said, referring to alternative cancer therapies.

Gundersen is due back in Suffolk family court next week. She said she will continue fighting until her son is released from the hospital.

In a statement to Eyewitness News, Terry Lynam with Northwell Health said: "Because of patient privacy, we can't comment specifically on this case, other than to say that he was accurately diagnosed and provided appropriate treatment at Cohen Children's Medical Center, and that we hope Nicholas receives the treatment he needs."