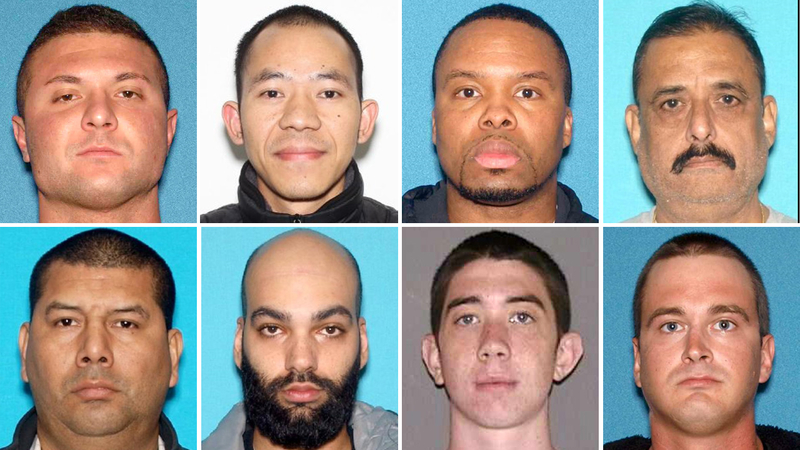 TRENTON, New Jersey (WABC) -- More than a dozen people have been arrested as part of an undercover operation targeting men who were allegedly using social media in an attempt to lure underage girls and boys for sexual activity.

Authorities say the 16 arrests in Operation Home Alone include a police officer, a high school teacher, drivers for two ride share companies, a minister and a bank branch officer manager.

"The 16 men we arrested allegedly used social media to stalk victims they believed were vulnerable children who could be sexually exploited," Attorney General Gurbir Grewal said. "Fortunately, their victims were really undercover officers prepared to put them in handcuffs."

The suspects were identified as:
--Peter Tuchol, Jr., 28, of Waldwick, a police officer with the Ridgewood Police Department
--Kevin Roth, 26, of Nanuet, a teacher at the High School of Computers and Technology in Bronx
--Dariush Ghamarnezhad, 37, of Pomona, a dental hygienist
--Joel Guichardo, 38, of Passaic, a barbershop owner
--Larry Noel, Jr., 43, of Stanhope, a warehouse worker
--Shaheen Lariff, 49, of New City, a bank branch office manager
--Rajan Lama, 33, of Woodside, a driver for a rideshare company
--Luis Gonzalez Palacio, 36, of Weehawken, a finance lead for a major internet service provider
--Roger Arroyo, 37, of Philadelphia, a traveling minister
--Yosef Kriger, 31, of New City, a pharmaceuticals delivery driver
--Michael Mancini, 36, of Hawthorne, a supermarket employee and DJ
--Teodoro Alvarez Ortega, 28, of Suffern, a restaurant server
--Jacob Smith, 26, of New Rochelle, a takeout food delivery driver
--Jose Martinez, 47, of Fairview, a takeout food delivery driver
--Jason Keizer, 33, of Garfield, unemployed
--Hareshkum Tailor, 55, of Garfield, a driver for a rideshare company

Charges range from luring to attempted sexual assault of a minor. Authorities say Tuchol was also found to be in possession of anabolic steroids and hypodermic needles and has been suspended from his job as a police officer, while Palacio allegedly had more than 13,000 suspected files of child pornography on his phone.

"Parents need to know that the profiles of underage girls and boys we posted on social media to catch these offenders could easily have been profiles of their own children, who might also be targeted by predators on chat apps and popular gaming sites," Grewal said. "Our message to parents with Operation Home Alone is be on guard. Our message to child predators is law enforcement is working overtime to find you and arrest you."

The arrests in Operation Home Alone were made over a five-day period from April 11 through April 15, and authorities say seven of the defendants traveled to the undercover house where they expected to find the child home alone. They typically initiated contact based on profiles posted on social media platforms by the undercover detectives and agents, authorities said, and the social platforms that were used in these encounters included Kik, Skout, Grindr, Tinder, MeetMe, and Adam4Adam.

Once chatting began, the undercover officers clearly identified themselves as underage girls or boys, officials said, and despite that information, the defendants allegedly engaged the purported children in conversations about sex and made arrangements to meet them for sex. Two allegedly sent photos of their genitalia.

"Parents need to be aware of their children's activities on the internet, and if children appear anxious or evasive when this topic is raised, it may be a red flag," Grewal said. "It is critical that parents talk to their children about social media and chat apps to let them know that the people they encounter may not be who they initially seem to be."

In past cases, the ICAC Task Force has made arrests of alleged child predators who used the following chat apps: Kik, Skout, Grindr, Whisper, Omegle, Tinder, Chat Avenue, Chat Roulette, Wishbone, Live.ly, Musical.ly, Paltalk, Yubo, Hot or Not, Down, and Tumblr. Arrests also have been made involving the gaming apps Fortnite, Minecraft, and Discord. Attorney General Grewal urged parents to familiarize themselves with these apps and warn their children about sharing information with strangers.