Exclusive: Asian woman recounts moment she was shoved into moving vehicle in Chinatown 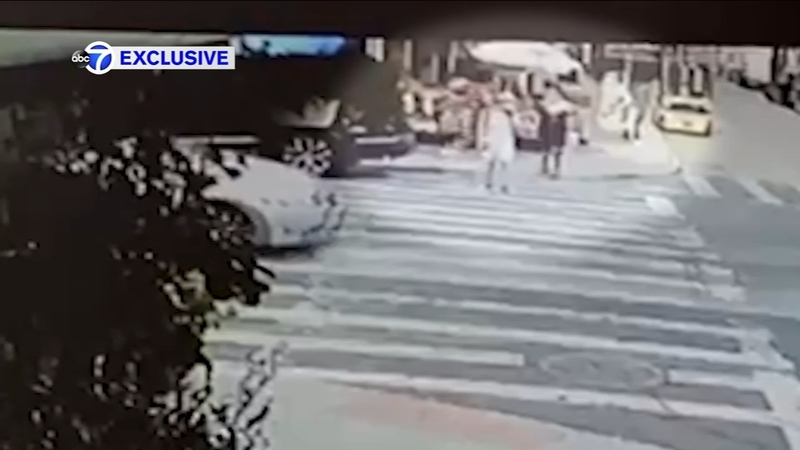 'I was in shock': Woman says she was shoved into moving vehicle in NYC

CHINATOWN, Manhattan (WABC) -- An Asian woman is speaking out after randomly attacked from behind and shoved into a moving vehicle.

It is what every responsible New Yorker does before crossing the street.

Video shows a woman in a light-colored dress as she looks both ways to check for oncoming traffic.

But in this case, the danger was lurking behind her.

A female suspect waits for the right moment, times her shove and pushes the victim right into a moving vehicle.

Somehow not only did the victim survive, but she walked away on her own two feet.

"I just felt a sudden shove to the back of my shoulder and the next thing I know I was down one parked car down. I was in shock. I didn't really comprehend what happened but I know I got hit because I felt the pain," the victim said.

In this exclusive interview with Eyewitness News, the 28-year-old victim says after the suspect shoved her, the suspect looked at the crowd and said "I have metal rods in my legs."

Cops say the unprovoked attack happened last week on Monday, around 2:40 p.m. on the corner of at Eldridge and Grand Street in Chinatown.

The victim suffered only a bruised knee, but a lifetime of trauma.

She got a good look at her assailant and says she'll never forget her face.

In fact, this victim found surveillance video before police did, because for days she was wondering ... did this really happen?

"I started having self-doubts. I didn't go to work for a couple days. I started thinking too much, like over thinking, replaying the scenario. And I thought to myself, did I see her somewhere before, down the street, did I bump into her? Did I cut her off at the stop light and I just didn't know? All that was getting in my head," the victim said.

Her assailant's intent was clearly to harm, but she doesn't know her motive.

Although, being she is Asian American, and that she was in Chinatown, she does wonder.

"Obviously it goes through Asian Americans' minds when this happens to you," she said. "For everyone out there who are not reporting any possible hate crimes out there, whether you think it is or not or you heard it or not, I think you gotta report it or your voice will never get heard."

Police have made no arrests in this case. Nearby security cameras did capture clear images of the suspect fleeing the scene.

Police have not yet released those images.