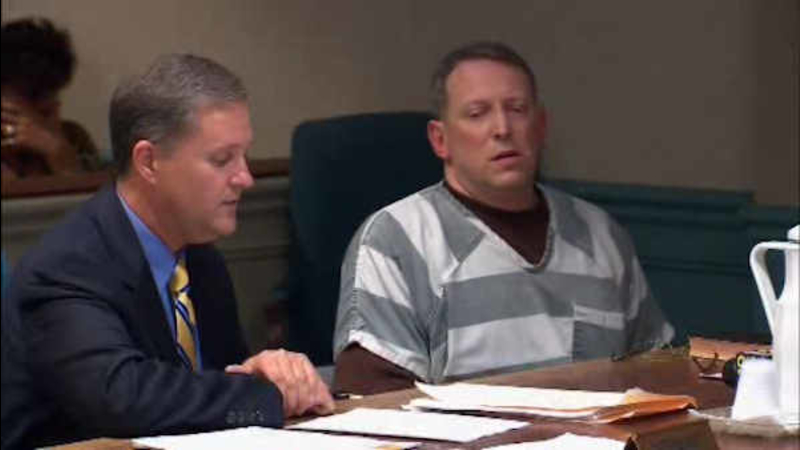 NEWTON, N.J. (WABC) -- A New Jersey man who claims to have been raped as a little boy was sentenced to five years in prison Thursday after pleading guilty in June to the deadly stabbing of his alleged abuser, his Boy Scout leader.

Clark Fredericks of Stillwater pled guilty to manslaughter. At his sentencing Thursday, he began by apologizing to the ocurt and the judicial system. "I don't recommend to anyone to follow my steps or the path I chose," said Fredericks, who did not try to defend the homicide he committed in 2012.

Fredericks admitted to stabbing 68-year old Dennis Pegg. He claims Pegg had sexually abused him from the age of 8 to 12 while he was a Boy Scout.

Pegg was his troop leader, a friend of the family, and a Sussex County sheriff's officer.

Impact statements at the sentencing took that abused child into account. "Dennis Pegg died in the same house in which he raped a little boy and he died at the hands of the little boy he raped," said defense attorney Dan Perez.

Fredericks reportedly said a childhood friend and a family member had been raped by Pegg as well.

Fredericks listened as Judge Thomas Critchley balanced the law, and life and death.

"Every person's life comes to them through the hand of God and not by leave of man, even a victimized child growing into a man," said Critchley.

Fredericks' fate was in his hands alone.

"I felt I couldn't come forward to the police, that nothing would be done to Dennis Pegg and that I would only further humiliate and traumatize myself," said Fredericks.

The prosecutor, who had agreed to the plea deal that reduced the charges, read a letter from Pegg's family.

"You clearly have made a number of choices over the course of your lifetime that have hurt yourself, your family and our community," said Sussex County assistant prosecutor Gregg Mueller.

Judge Critchley took his time, chose his words carefully and had the courtroom fixed on his final decision, saying four and a half to five years behind bars is appropriate.

Fredericks has already served three and a half years of his sentence, an eternity already for his family.

"I don't think there is a night in the three and a half years that he has been away that I could go to bed and sleep soundly" said his mother, Joan Fredericks.

Clark Fredericks could be out in a year and a half or even less, and when he gets out, a friend says he has a house for him and his mom.