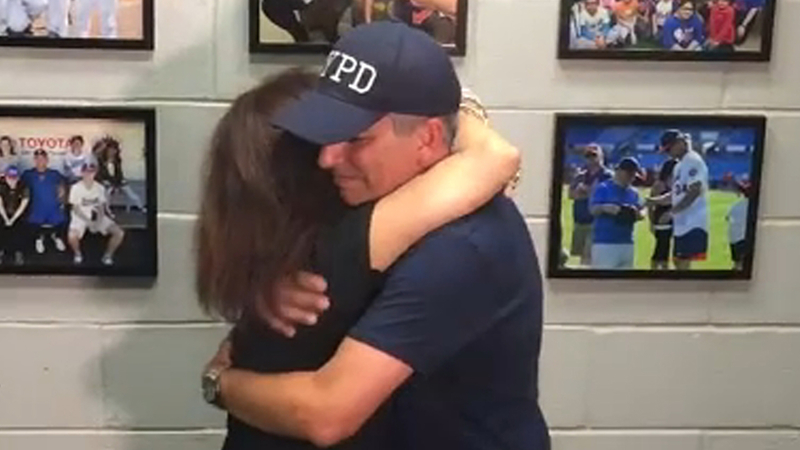 This year, one of those honorees will be an NYPD detective who saved a life by donating a kidney to a woman he had never met.

"It seemed to be a no brainer, to be honest," Detective Michael Lollo said.

He said it was an easy decision to have a major surgery, all to help a woman in Pennsylvania.

"My surgery started at 5:30, I think it took about two hours," he said. "They have a courier with a cooler, so to speak. They stuffed the kidney, my card, and my letter into the cooler, and they drove it to Maryland."

Lollo was inspired to act by a NYPD colleague in need of a kidney, and by a billboard in Times Square. The $35,000-a-month ad was donated by a friend of Marc Weiner, who himself needed a kidney last year.

"Do we believe in miracles? You bet," Weiner said. "I'm somebody who is struggling with their disease, but will overcome it."

So Lollo decided to go under the knife.

His organ wasn't a match for his colleague or Weiner, but he did match the woman in Pennsylvania.

Doctors never reveal a patient's name, but the recipient, Ruth Tisak, did some detective work of her own and sent the real life detective a Facebook friend request.

"So I just decided to message her, and all I said was, 'Hey, I think you have my left kidney,' and pressed send," Lollo said.

That all led to an incredible moment -- the two strangers, bonded by organ donation, met for the first time at Citi Field.

Not only did Lollo change Tisak's life, he says there is a bigger message here. So many people are in need of an organ transplant, and to find one, he says all you have to do is look around.

The NYPD veteran says he was in the hospital for just three days and left with a tiny scar on his belly button -- and a major change in his outlook on life.

"You know, listen, not everybody has to go donate a kidney," he said. "But you know, saying, 'Hi' to somebody, holding a door for somebody, helping someone that you see on the side of the road that's in need, we can all help people in different ways."