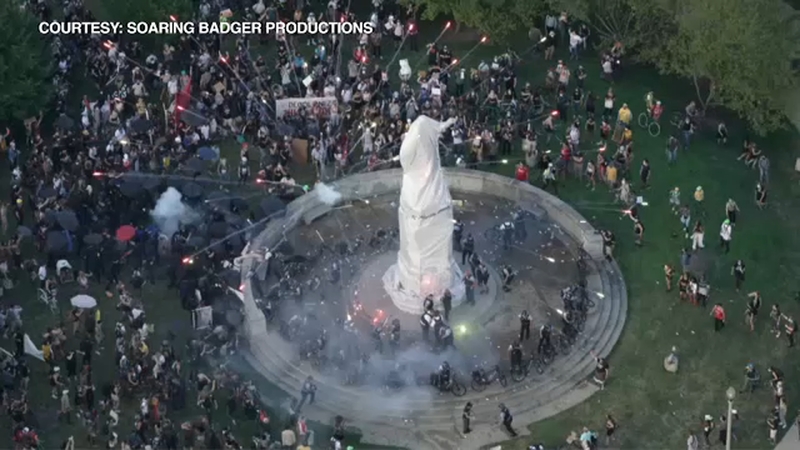 CHICAGO -- Chicago officials and activists condemned the actions of Mayor Lori Lightfoot and the police department after a rally escalated Friday night.

Authorities deployed pepper spray on crowds attempting to pull down the statue, forcing the crowd to eventually dispersed from the area.

Before that moment, protesters were seen throwing bottles and full soda cans at police, while some even shot off fireworks.

Multiple officers were reportedly injured, and some were treated at the scene.

The Chicago Fire Department says that at least four members of the crowd were injured and taken to a hospital in good condition, and several arrests were made.

Chopper7 captured the aftermath of a protest near the Christopher Columbus statue in Grant Park on Friday.

Protesters had initially gathered for a Black Lives Matter demonstration at around 5 p.m.

The crowd grew to several hundred before making their way to the statue of Columbus, which the city had covered in plastic.

The crowd tied at least two ropes to the statue to try to pull it down.

At that point, police tactical units arrived, deploying pepper spray. Several people, both protesters, and police were overcome by the chemical, pouring water into their eyes.

Police were still at the scene late Friday evening, while the statue remained upright.

Some members of the Chicago City Council commented on the protest on Twitter.

Alderman for Chicago's 35th Ward, Carlos Ramirez-Rosa, said, "Black and Indigenous Chicagoans and people from all across the city came together to do what our so-called progressive mayor refused and failed to do."

Black and Indigenous Chicagoans and people from all across the city came together to do what our so-called progressive mayor refused and failed to do. They were met with violence and abuse. It's shameful and disgusting.

Alderman Daniel La Spata, for Chicago's 1st ward, said, "Chicago may be the only 'liberal' city willing to brutalize Black and brown youth to protect a symbol of white supremacy."

Appalled at the aftermath of today’s Columbus protest. Chicago may be the only “liberal” city willing to brutalize Black and brown youth to protect a symbol of white supremacy. Sickening.

At 9 a.m., several aldermen and Illinois officials gathered to condemn CPD's response to the protest.

The Italian American Human Relations Foundation of Chicago also responded to the protest, saying in part, "This was the work of evil-minded people. They have been fueled by an educational system too lax in its reliance on a poor curriculum re the education of the legacy of Columbus, and abetted by the majority of the media who refuse to question the baseless revisionist history of the Columbus saga."