'We are human beings:' Brooklyn couple from Mexico speaks out after spending weeks in ICE custody 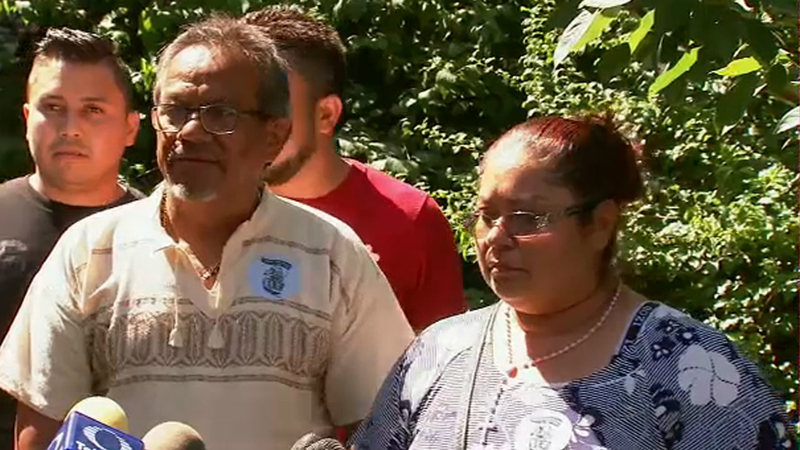 Couple back home after being detained at Fort Drum

PARKVILLE, Brooklyn (WABC) -- A couple is thankful to be back home in Brooklyn after spending more than two weeks in ICE custody.

Concepción and Margarito Silva, an undocumented couple from Mexico, were taken into custody while visiting their pregnant daughter and enlisted son-in-law at Fort Drum on the 4th of July.

The Brooklyn couple, who have lived in the U.S. for more than 20 years without authorization, reportedly showed New York City-issued ID cards along with Mexican passports.

When questioned, authorities said they admitted that they were living in the country illegally. But immigrant activists refused to confirm that.

"They presented the same type of identification that they presented successfully at various other military bases where their family was stationed before," said Daniel Altschuler with Make the Road New York.

The couple was reunited with their children Monday night after posting $20,000 bond.

On Thursday, the couple spoke for the first time since their release.

"What happened to us was tragic," Concepcion Silva said. "We are people, we are human beings. We have no criminal records and the whole community is behind us."

Their daughter said her father is still traumatized and still shaking after 19 days of detention.

"He's different, he's different," Perla Silva said. "And fortunately he's home with us right now but it's not the same. I still can't believe what happened to us that day."

A deportation hearing has yet to be scheduled.

"I'm going to keep fighting because my daughter and I need my parents here," Perla Silver said. "I don't know what's going to happen to us if anything happens to my parents. I really don't."