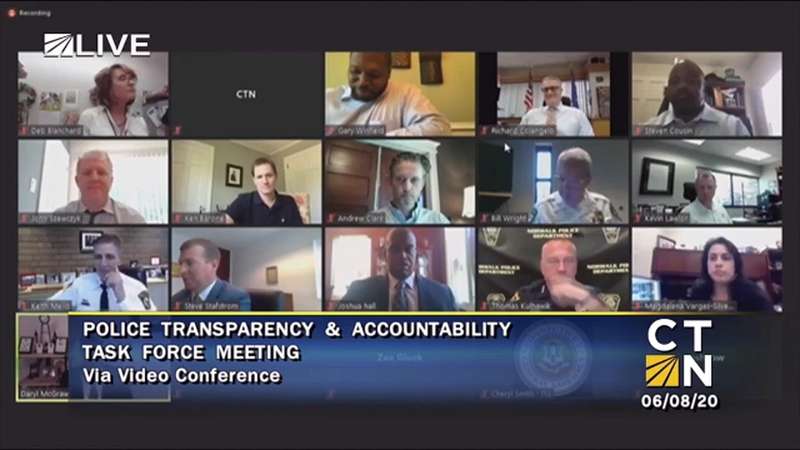 NEW YORK -- Connecticut officials said Monday that additional police reforms are needed, even though protests across the state, sparked by George Floyd's death in Minneapolis, have been relatively peaceful and the state recently passed legislation to make law enforcement more accountable.

State lawmakers said they plan to propose new legislation within the next month or two, while members of the Connecticut Police Transparency and Accountability Task Force, created by legislation passed last year, expect to submit additional recommended reforms by the end of the year or possibly sooner.

Daryl McGraw, co-chairman of the transparency and accountability task force, said during a video meeting that although the state hasn't had the rioting and crime other states experienced in the past week, it does have "police brutality issues."

"We have these problems. Let's be clear. ... We do have racism issues within the police departments and within our state," McGraw said. "We don't need to wait until a George Floyd situation happens before we act accordingly."

Some steps are already being taken. Milford Police Chief Keith Mello, chairman of the Police Officer Standards and Training Council for the state of Connecticut, said the group this week plans to include a prohibition on the intentional use of chokeholds and neck restraints in the council's mandated policies that police departments must follow. Mello said the council also will require that every department has a policy requiring officers to intervene or report police wrongdoing.

Last year, Democratic Gov. Ned Lamont signed a wide-ranging bill into law that requires police to publicly release body camera and dashboard camera recordings within 96 hours after a police employee uses force against a person. The new law also requires all Connecticut police departments to submit annual use of force reports, while expanding the definition of "use of force" to include police motor vehicle chases and the use of chokeholds. Police pursuit laws were also updated to prohibit officers from shooting at or into a fleeing vehicle, or from standing in front of one.

The transparency and accountability task force was also created by that 2019 law.

Lamont on Monday called last year's legislation "a great and important down payment" on policy accountability. But he said more needs to be done and his chief of staff has been talking with members of the General Assembly about plans for a special legislative session, noting "criminal justice reform and police accountability will be at the top of that list."

Lamont, however, said Monday he did not agree with calls to defund police departments.

It remains unclear what will ultimately be included in this latest police accountability bill. Mandatory police body cameras, legal bans on chokeholds, the establishment of community liaison programs, more independent oversight of police misconduct, additional restrictions on police pursuits, and changes to police training have been among the numerous ideas mentioned.

State Sen. Gary Winfield, D-New Haven, co-chairman of the General Assembly's Judiciary Committee, said the legislative effort - in addition to the task force's expected recommendations - will be "as comprehensive as possible," predicting there will be a loud demand from the public for something far-reaching and immediate.

"You're going to see people who are walking down your streets, my streets, who are going to be walking to the Capitol and they're not going to accept that we're going to come up with a report in January that's going to say, 'this is how we might be moving forward,'" he said. "And I think we all have to reckon with that."

Various groups and individuals have staged protests around the state, urging action. On Monday, a group of clergy said they were going to occupy the state Capitol steps and fast until Lamont convenes a special legislative session on police reforms.

Chief State's Attorney Richard J. Colangelo, Jr. warned Monday that "police legitimacy" needs to be restored in Connecticut and "the only way to do so is with thoughtful, comprehensive reform that is long overdue."

Brooklyn Memorial Service for George Floyd
What are the tactical reasons behind NYC's curfew?