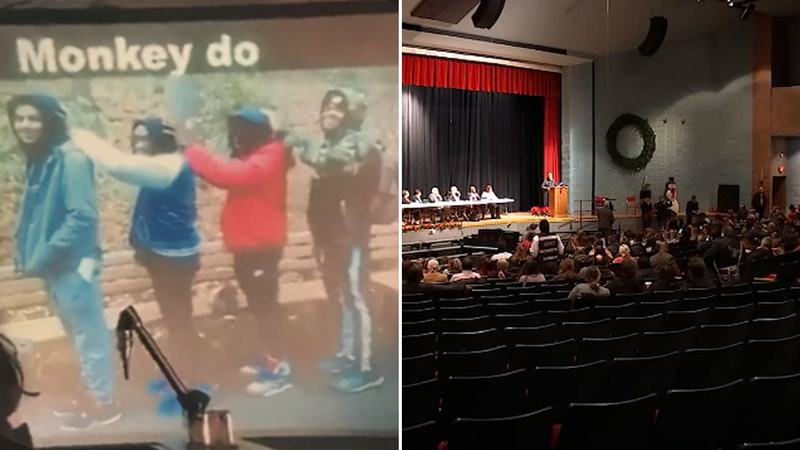 Show of support for teacher who showed 'culturally insensitive' photo

MIDDLE ISLAND, Long Island (WABC) -- There was a big show of support for a teacher accused showing a culturally insensitive photo during class at a Long Island high school.

Four black students and their families at Longwood High School are planning to file a lawsuit against the teacher who showed the photo of the students taken at the Bronx Zoo in November - along with the caption, "Monkey do."

They want to sue the district for $12 million for emotional distress and violation of their civil rights.

The school board held a meeting Thursday night where more than 100 students and parents showed up to support the teacher.

In fact, so many people showed up that the meeting had to be moved from a classroom to the auditorium.

The district said it was "an unfortunate lapse of judgment," but many students are taking the teacher's side.

"Not only is he a great teacher with high morals and respect by every student in this school, but he pushed me to go into AP chemistry which is one of the harder classes to take," former student Angelene Bailey said.

"What I strongly believe is that this was an unintentional mistake. To terminate this loved and admired teacher by so many coworkers and students will send Longwood back as a community," student Anaya Phillips said.

Of course not everyone agrees.

"We have to remember this is about the students. How will this affect them?" said parent Dr. Beverly Dean.

The plaintiffs' attorney also took the mic at the meeting, but it didn't go over so well.

He was met with boos.

Supporters say this teacher has taken a similar photo at the zoo with the same pose and caption for years.

"The students shown in the slide in the presentation has varied over the years and have never been used to represent a single racial or ethnic group," said student Kieran Monaghan