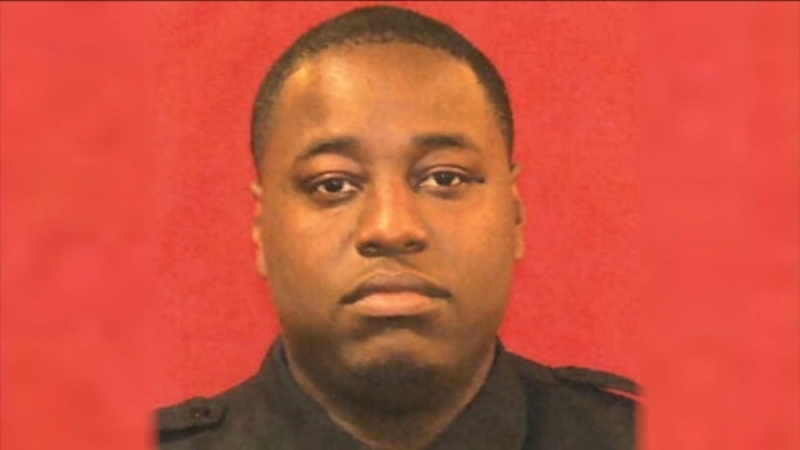 Authorities say, John Jeff, 28, was walking down Ridgedale Street near DeFoe Street in Jamaica around 3 a.m. when he was shot in the head and chest.

An off-duty New York City correction officer was fatally shot in the head and chest after leaving a Queens party Saturday morning.

"I heard a few gunshots go off. It sounded a little far, but I could still hear it," Jamaica resident Angeline Simeon said.

Police sources tell Eyewitness News that a female fellow correction officer was with Jeff at the time and she was the one who called 911.

He later died at Jamaica Hospital.

Earlier in the night, he and the woman had left the party.

When they were driving back to the party, they were boxed in by three cars and, sources say, a suspect got out of one of the cars and shot Jeff.

We're told the suspect then grabbed Jeff's department-issued gun out of his holster and used it to shoot him several times before taking off with the gun.

Marcus Solis has the latest surge of violence in New York City overnight.

Jeff had been assigned to the Anna M. Kross Center on Rikers Island.

He had only been a correction officer for two years.

"Early this morning, the Correction Officers' Benevolent Association was notified that New York City Correction Officer John Jeff, assigned to the Anna M. Kross Center on Rikers Island, was found dead in South Jamaica Queens. He sustained multiple gunshot wounds. He was 28 years old and was on the job for just over two years with his whole life and career ahead of him. He was well-liked and highly regarded by his fellow officers. While the police continue to investigate this horrific incident, which is being investigated as a homicide, our hearts and prayers are with Correction Officer Jeff's family and his fellow officers at AMKC during this painful time. We are offering a $10,000 reward for any information leading to the arrest and conviction of Correction Officer Jeff's assailant or assailants," Correction Officers Benevolent Association President Benny Boscio Jr. said in a statement.

This is a tragedy.

Chirlane and I are keeping this young man’s family, loved ones and brothers and sisters in @CorrectionNYC in our hearts today.

An investigation into this cowardly attack is ongoing. If you have any information please contact the NYPD. https://t.co/YcQn7DV21q

"Our entire department is grieving this morning upon learning of the tragic death of an off-duty Correction Officer who was fatally shot in Queens last night. My heartfelt condolences and prayers go out to our officer's family, friends and colleagues throughout the department and we are doing all we can to provide support during this difficult time," New York City Department of Correction Commissioner Cynthia Brann said.