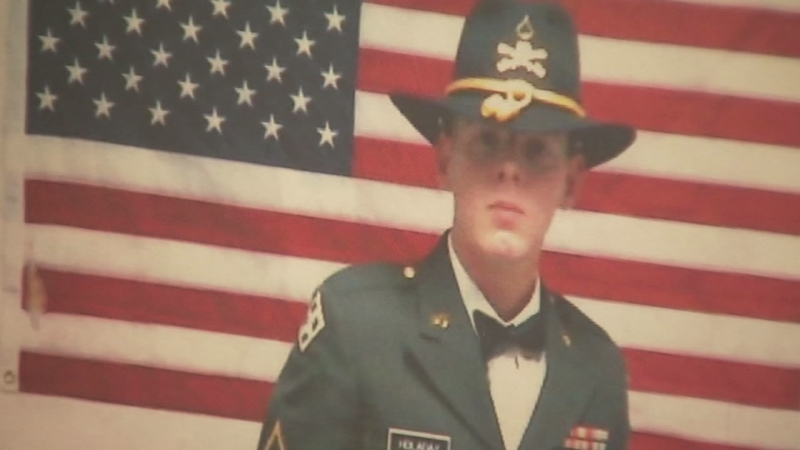 FRESNO, California -- A mother in California is defending her war veteran son -- a man who shot her, and killed her husband.

"He came home and didn't get the help he needed and I want people to understand that," said Carol Holaday.

Prosecutors charged Kyle Holaday with murder and four attempted murders after a shooting in March.

But Carol Holaday said she doesn't recognize her son when looking at video showing him face down on the ground when police arrested him.

"This is my son," Carol Holaday said as she held up a photo of her son in uniform. She treasures her photos of Kyle in his Army uniform.

She knows he's technically the same man who fired the gun that day -- killing her husband, wounding two of her friends, and grazing a five-month-old baby.

He even shot her four or five times. But she believes it wasn't really Kyle pulling the trigger.

"My son served eight years for our country," she said. "He did a tour in Afghanistan. He did a tour in Iraq. He came home and didn't get the help he needed and I want people to understand that. I love him very much and I will support him 100 percent."

On his two tours, Kyle Holaday served as a scout in front of the front lines, and engaged in battle several times. The war never seemed to leave him after he came home.

"He had trouble sleeping and he had nightmares of battles he was fighting, had fought," said Mary Gum, his grandmother.

Psychologists say soldiers often return with PTSD symptoms like mania, paranoia, and hypervigilance. And trauma can amplify dissociative disorders - out-of-body type experiences where they feel like they're observing or dreaming something instead of experiencing it.

"We do have things called flashbacks where something triggers that recollection or you feel like you're re-living or re-experiencing what you experienced either in Iraq or Afghanistan," said Dr. Garry Bredefeld, a clinical psychologist who has not treated Holaday and doesn't know his personal history.

Holaday's attorney says he has no memory of the shooting and he cried when she told him what he'd done. He had been getting treatment at the VA, but his family says it was sporadic and not frequent enough.

He had an appointment to see a psychologist a few weeks afterwards, but by then the damage was done.

"I told him I didn't cancel the appointment," Carol Holaday said. "And he cried because he said 'I waited so long for that appointment and because it wasn't canceled somebody else who was waiting for an appointment was not able to be seen.' My son is a good man."