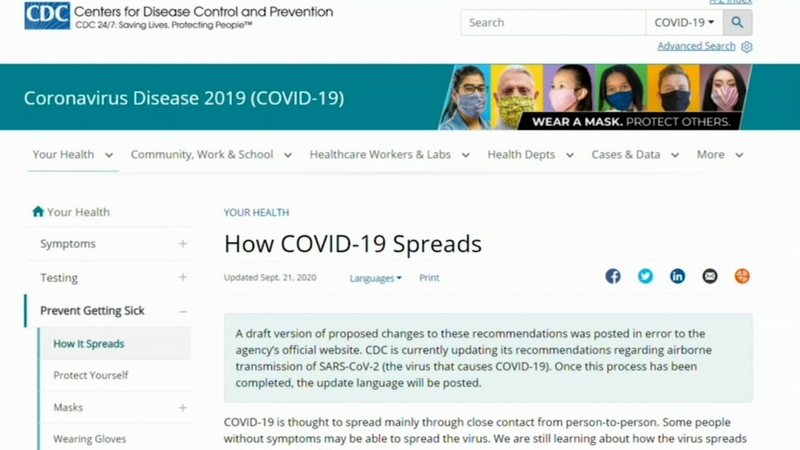 The Centers for Disease Control updated a document Friday without fanfare that states the agency's position on how the coronavirus spreads, then removed the new guidance Monday saying it was posted in error.

The document said person-to-person and coughing/sneezing/breathing are the primary ways the virus is transmitted through droplets, but the agency then said there is growing evidence that airborne droplets after a sneeze or cough -- droplets that linger in the air -- are of concern.

"There is growing evidence that droplets and airborne particles can remain suspended in the air and be breathed in by others, and travel distances beyond 6 feet (for example, during choir practice, in restaurants, or in fitness classes)," the document said. "In general, indoor environments without good ventilation increase this risk."

But on Monday, the agency removed the mention of airborne transmission from their website with the following explanation.

"A draft version of proposed changes to these recommendations was posted in error to the agency's official website," it reads. "CDC is currently updating its recommendations regarding airborne transmission of SARS-CoV-2 (the virus that causes COVID-19). Once this process has been completed, the update language will be posted."

In a Zoom conference call on Monday, a senior CDC official explained that the online post that suggested the virus that causes COVID-19 is airborne was an early draft still undergoing scientific review and was posted by mistake.

"I just want to let you know that this early draft of a document that's presently undergoing scientific review wasn't intended to be posted," he said. "That was an error on behalf of our agency, and I apologize on behalf of CDC for that. We weren't ready to put it up."

Brooks said that it remains unclear if the virus is airborne.

Brooks also defended what he called a "rigorous scientific review process" by the CDC of its scientific studies "to ensure timely, accurate, reliable, the most important trustworthy public health information and recommendations."

"CDC as an agency stands by the scientific integrity (of) the more than hundred -- now over one hundred -- COVID-19 reports that the MWWR war has published to date," he said.