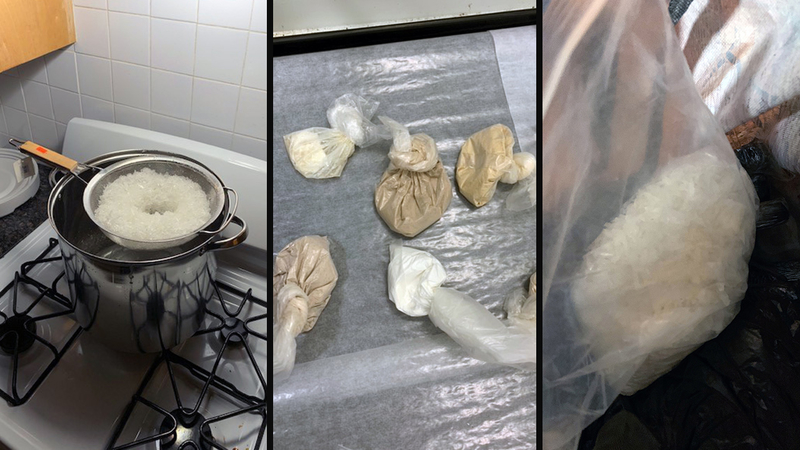 1st ever bust of meth conversion lab in NYC

The Drug Enforcement Administration and local prosecutors announced they had dismantled the illicit lab and seized 22 pounds of methamphetamine, along with 45 grams of heroin and 2,000 pills with the appearance of Percocet and oxycodone that will be tested as possible counterfeits.

This is the first meth conversion lab that DEA has encountered in New York City.

"It is rare and extremely dangerous to discover a methamphetamine conversion lab in a densely populated area like New York City," Special Narcotics Prosecutor Bridget Brennan said in a statement.

Charles Polevich, 70, of Guam, who also lives in Mineola, will be charged with leaving the scene of an accident and more.

The supply included about 2 pounds that had been converted into the crystalized version that users can smoke, they said.

"Together our NYPD investigators and law enforcement partners worked swiftly in this case to arrest these defendants and shut down their alleged trade in illegal narcotics," NYPD Commissioner Dermot Shea said. "This case illustrates our sustained efforts to fight crime and relentlessly seize the kind of illegal drugs that endangered this Bronx community and are a threat to all New Yorkers"

The lab, located in a six-story residential building on Kingsbridge Avenue in the Bronx across the street from a grade school, was using chemicals that can emit toxic fumes, cause fires and even explode if mishandled, they said.

"Illegal drug labs where chemicals are used to produce narcotics pose grave dangers for New Yorkers and first responders, including the men and women of the FDNY," Fire Commissioner Daniel Nigro said. "Thanks to the excellent work of law enforcement and the actions of FDNY members who responded, this illegal operation was shut down safely without injury."

Ray Donovan, head of the DEA's New York office, called it further evidence that Mexican drug cartels are getting more aggressive about trafficking meth in a market traditionally dominated by cocaine and heroin.

"This isn't 'Breaking Bad,' but it is a bad sign that methamphetamine is trying to make a home in New York City," he said. "If the latest reports of increases in drug-related overdose deaths don't scare you, crystal meth conversion labs in New York City should. As the Mexican drug trafficking networks continue to push methamphetamine across the nation towards New York, DEA and our law enforcement partners will continue to interdict the shipments, dismantle distribution networks, and save lives."

Mayor de Blasio says the city has less than 30,000 first doses left and might run out of the COVID vaccine Wednesday or Thursday.

An investigation was launched after three men were spotting hauling gallon drums of acetone into the vacant apartment.

Inoel Acosta, Luis Reyes and Angel Zepeda were arrested on drug possession and other charges.