WABC
By Dave B. Evans 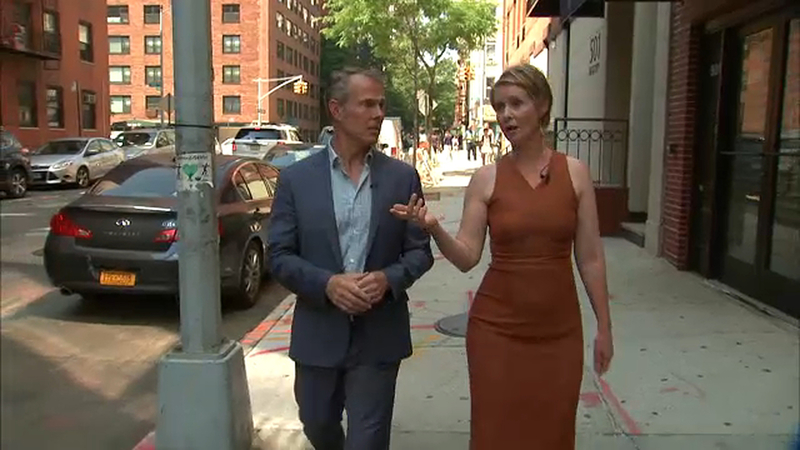 NEW YORK (WABC) -- On Thursday afternoon we saw a side of Cynthia Nixon's life we rarely see.

The Emmy and Tony-award winning actress took us on a tour of her old neighborhood in Yorkville and pointed out her apartment.

"This is where I grew up. Yep, a 5th floor walk up," she said. Nixon moved to the neighborhood when she was seven and she credits her mother for instilling in her a scrappy toughness.

"Whether it was standing up to my Dad and his abuse or standing up to cancer when diagnosed with it when I was 13, being pro-active and taking on a fight," she said.

Nixon is now in the fight of her life, taking a on a well-funded, two-term incumbent Governor. The latest polling predicts a resounding victory for Andrew Cuomo next Thursday night but Nixon says the polls are wrong.

She told us, "I think we're going to get a big surprise. If everybody turns out Thursday. We know who our voters are."

During our interview voters on the street interrupted several times telling her good luck. Nixon laughed and waved saying, "I get this a lot. They want him (Cuomo) out. They say he makes Chris Christie look like a choirboy."

Nixon entered the race on March 19th and many analysts say she pushed Cuomo to adopt more progressive positions on things like marijuana legalization and prison reform.

We asked Nixon, who's 52, if the race had been worth it, win or lose? "Oh absolutely it's been worth it. It's been an incredible journey," she responded.

We offered Governor Cuomo the same interview opportunity as Nixon but so far he's declined.