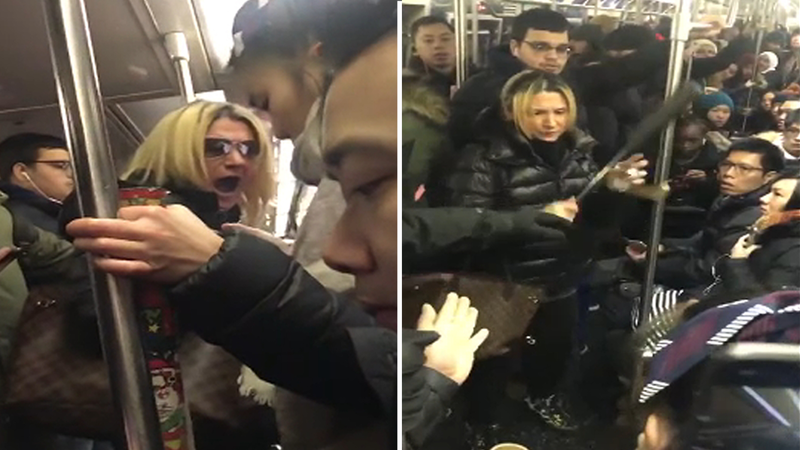 SUNSET PARK, Brooklyn (WABC) -- A Brooklyn woman is under arrest after allegedly unleashing a violent, racist tirade on another straphanger onboard a D train.

It happened Tuesday around 8:30 a.m. on a northbound D train near 9th Avenue in Borough Park, Brooklyn.

"Everybody was just looking at each other like, 'Are you sure you just heard that? Did you just hear that?'", said the man who stepped in to help, Juan Ayala, speaking exclusively with Eyewitness News.

The victim of a racist and violent subway attack, who did not want to show her face, speaks out about the terrifying incident.

The dispute began after the suspect bumped into the victim, police said.

Juan Ayala held Luschchinskaya for police, but was worried about the victim.

"It's something that can almost be traumatizing, honestly," said Ayala. "It's not a situation that anybody should be involved in, especially a little girl."

The victim suffered lacerations to her face. The good Samaritan also suffered scratches.

Lushchinskaya was apprehended at 36th Street and placed under arrest.

Then she tried me so I had to detain her until the cops showed up 🤦🏾‍♂️ pic.twitter.com/C3UybusAxa

"Coming home, I couldn't breathe," said the victim. "Every time I have to get a train, I'm really careful where I'm watching."

A criminal complaint from June shows that Lushchinskaya was charged in June in connection with another D train scuffle. According to the complaint, Lushchinskaya allegedly pepper-sprayed a man on the train at the 36th Street station.