Candace McCowan reports on the investigation into the shooting.

BEDFORD-STUYVESANT, Brooklyn (WABC) -- Investigators have questioned a man in connection with last weekend's deadly shooting of a 1-year-old baby boy in Bedford-Stuyvesant, Brooklyn.

But 25-year-old Dashawn Austin was not charged with the infant's death.

Instead, he was charged with the March 3 murder of a 26-year-old man at Amour Cabaret Strip Club on Nostrand Avenue in Brooklyn, which is believed to be gang-related.

Police believed Austin may known something about Sunday's shooting at an outdoor barbeque that left 1-year-old Davell Gardner dead and three other people wounded.

He was also questioned in three other shootings.

Gardner, two months shy of his second birthday, was shot in the abdomen.

The NYPD says the shooting near the Raymond Bush Playground at Madison Street and Marcus Garvey Boulevard may have been gang-related, and they are still looking for the two men seen in video opening fire on the gathering.

A $15,000 reward is being offered for information that leads to arrests. 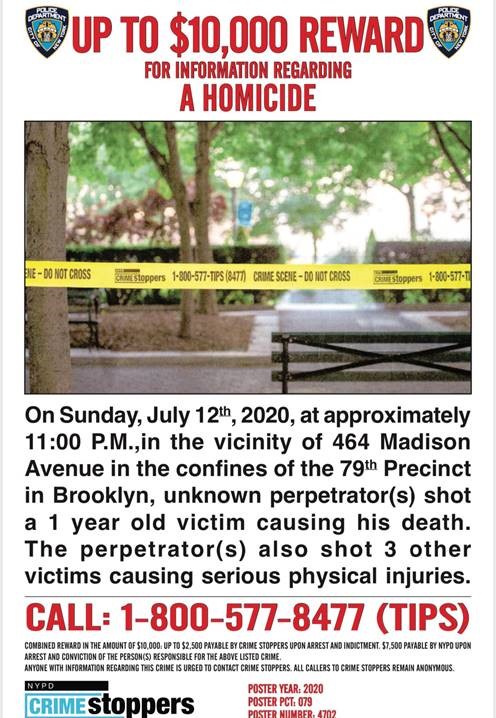 A memorial now stands along both sides of Madison Street, where Sunday's deadly shooting happened.

A fresh set of candles and balloons are left behind after a vigil held at the scene Thursday night, the second in a week.

A candlelight vigil was also held Tuesday evening, as residents pleaded for change.

The apparent break in this case comes as Mayor Bill de Blasio's "Take Back the Streets" initiative begins in Brooklyn this weekend as the city works to prevent another weekend of deadly shootings.

The mayor says residents can also expect to see more police officers in the areas that have had problems over the past month.