Death toll in volcano eruption climbs to 15, as divers search for more bodies 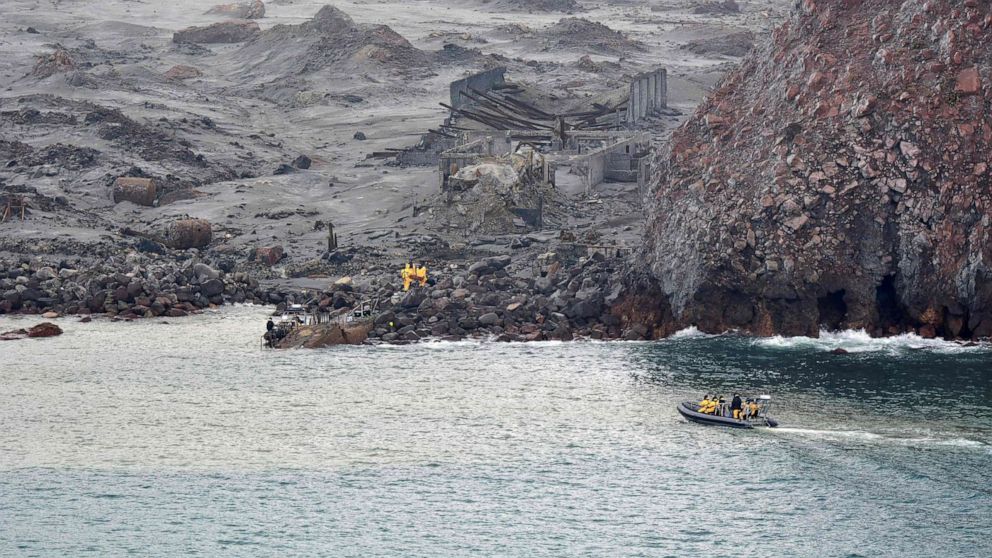 LONDON -- Another person has died from their injuries in the deadly volcanic eruption on New Zealand's White Island, bringing the confirmed fatalities to 15, police said Saturday.

The bodies of two people are still unaccounted and divers have been deployed into the waters surrounding the island to search for them.

So far, authorities have retrieved the bodies of six tourists from the volcanic island during a major operation that began at first light on Friday.

"Unfortunately the recovery option is not over as two people remain unaccounted for. We know at least one body is in the water," New Zealand Police Commissioner Mike Bush said in a statement, noting that divers "are currently attempting to recover this body."

"We are making every effort to locate and recover the two remaining deceased," he added. "The environment the recovery team faced today was highly unpredictable and challenging. They showed absolute courage and commitment to ensure we can offer some closure to the families and friends of those who have lost loved ones."

White Island, also known as Whakaari, is about 30 miles from mainland New Zealand and is home to the country's most-active cone volcano. The uninhabited island has had regular eruptions for years but has become a widely popular tourist destination, accessible only by boat and helicopter.

A total of 47 people, including at least nine Americans, were visiting the volcanic island when it suddenly spewed scalding steam, ash and rock into the air Monday afternoon. Most people were evacuated via helicopters that day and taken to hospitals for injuries, while several remained stranded on the island, according to the New Zealand Police, which had said there were likely no survivors.

Rescue workers were unable to return to White Island for three days because the conditions have been too dangerous and unpredictable. A 5-mile no-fly zone is in place around the island, along with a five-nautical-mile maritime exclusion zone.

At least nine people have died from their injuries since being rescued, police said.

Meanwhile, dozens of people suffering burns from the volcanic eruption remain hospitalized and medical staff are working around the clock to care for them. Many of the victims sustained severe burns covering over 90% of their bodies, and New Zealand doctors will need an estimated 1.2 million square centimeters of skin grafts to continue treating the patients, according to Dr. Peter Watson, chief medical officer of the Counties Manukau District Health Board.

Authorities are still working to confirm the identities of the deceased as well as the injured. New Zealand police have launched an investigation into the circumstances of the deaths and injuries on White Island.

Those who cannot get in touch with a friend or family member in the wake of the eruptions are urged to register them by visiting the New Zealand Red Cross website, or they can contact the New Zealand Police.