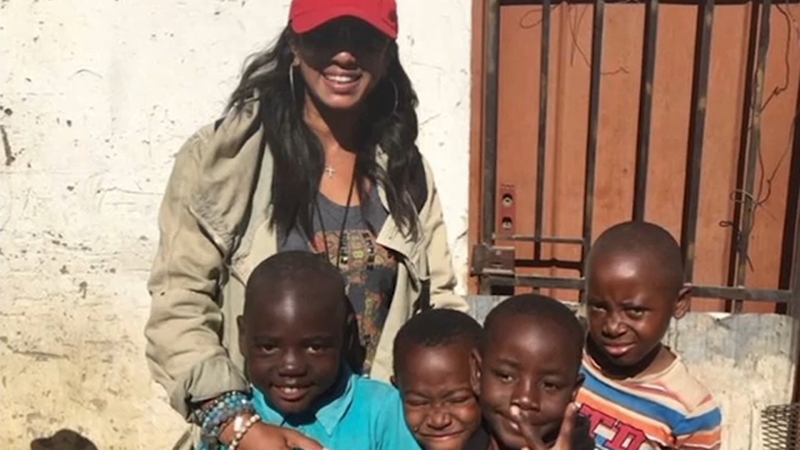 JOHANNESBURG, South Africa (WABC) -- One in nine people in the world don't have access to clean drinking water and part of the solution comes from a New York-based philanthropist.

In fact, some young second and third graders at one severely impoverished school in South Africa were drinking water out of garbage cans until Malaak Compton-Rock stepped in.

"The expressions on their face basically said everything," she said.

An ice-cold glass of clean and safe drinking water is a luxury the children at Musenga Primary School never had.

"People in this community, most do not have running water in their homes. So they go to these things called JoJos, which are these large kind of green tubs that are in the air attached to a pipe," Compton-Rock said. "The kids at Musenga, some of them are accessing water out of a garbage can."

The Musenga school is located in Diepsloot, an informal settlement in Johannesburg.

"Most people in Diepsloot live in extreme, extreme poverty," Compton-Rock said. "On a global scale, we're talking about living on $1 to $2.50 a day, for everything."

With little to no resources, Compton-Rock made a commitment to the community 12 years ago.

On Mandela Day last July, her nonprofit rolled out another arm of programming to address the water crisis.

"The excitement is palpable. I mean, people are blown away," Compton-Rock said.

They were blown away because without any pipes or plumbing, solar hydro panels can literally make water out of thin air.

The company behind the technology, Zero Mass Water, is based in Phoenix.

"The source panel is off grid. It's literally a panel that sits there that produces high quality drinking water using sunlight and air," said Rob Bartrop with Zero Mass Water.

The students at Musenga currently get their water from a borehole. But once all of the panels are installed, they won't have to anymore.

"The Angel Rock Foundation did what we hope the private sector and charitable people in developing countries will do, and look to apply is look to apply technologies to problems in the developing world," Bartrop said.

While Musenga is the first school to get the hydro panels, for Compton-Rock it won't be the last.

"Water is life. We need water to live life. We cannot expect young learners to do their best and be their best at school if they have no water," she said.