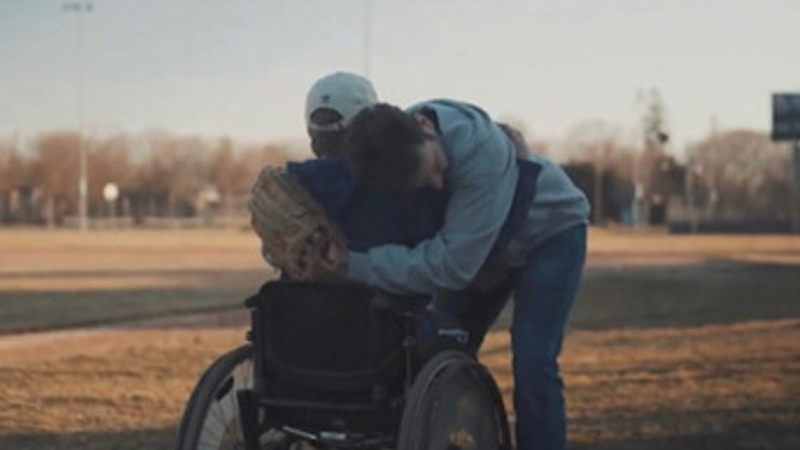 Mattituck High School senior Lucas Kosmynka won $5,000 in the contest, which was sponsored by End Distracted Driving -- an organization founded in 2009 by the parents of a 21-year-old New Jersey woman who was killed by a distracted driver.

The one-minute long video entitled "Heads Up" opens with a son and father playing baseball.

They leave to pick up a family member, and as the father is driving, he answers a phone call. The son yells, and the screen goes black. The closing shot is the father and son on the same baseball field, but this time the son is in a wheelchair.

"We had the boy paralyzed because every day, he will wake up and see what he has caused for his mistake," Kosmynka said.

Kosmynka said he chose baseball because a physics teacher and baseball coach at Mattituck High School used to always tell his students, "Have a day. Drive safe."

The boy in the film was played by Kosmynka's best friend's brother, while Michael Fedele, a former actor and a custodian in the Mattituck-Cutchogue school district, played the role of the father.

"To work in that film and then to watch the finished product saying to myself, 'I don't know how I could survive if that was my mistake,'" Fedele said.

Fedele and Kosmynka have worked on a few films together, including a short film on suicide awareness, which is now being used by the Suffolk County Department of Health as part of its Peer Education training.

Kosmynka's film teacher, Tiffany Pelczar, said she thought it was interesting that he chose to center the distracted driving story around a father and son and not teenagers.

"It really can reach a really wide audience," Pelczar said. "And I think for a filmmaker and storyteller, that's kind of what you want, so I think he's accomplished that. I'm super proud of him."

Kosmynka's mother, Christine, said the video points out that people assume young people are the ones to blame for distracted driving.

"They're the ones who really are distracted the most," she said. "They're not."

Lucas Kosmynka's father, Martin, was himself in a car accident many years ago, leaving him unable to walk. In fact, it was one of his old wheelchairs that Lucas used in the final scene.

"The last shot when they fan back and you saw that boy in that chair," Martin Kosmynka said. "To me, that told the whole story."

Joel Feldman, the founder of EndDD.org, said throughout the past few weeks he's been showing Lucas's video to more than 1,500 parents across the country.

"Many parents have told me this video has changed the way they will drive," Feldman said. "Our thanks to Lucas for helping moms and dads give up their driving distractions."

Lucas donated $500 of his winnings to a local foundation named after a Mattituck High School graduate killed by a car that had jumped the sidewalk.

Lucas is attending Syracuse University in the fall. He will study film.