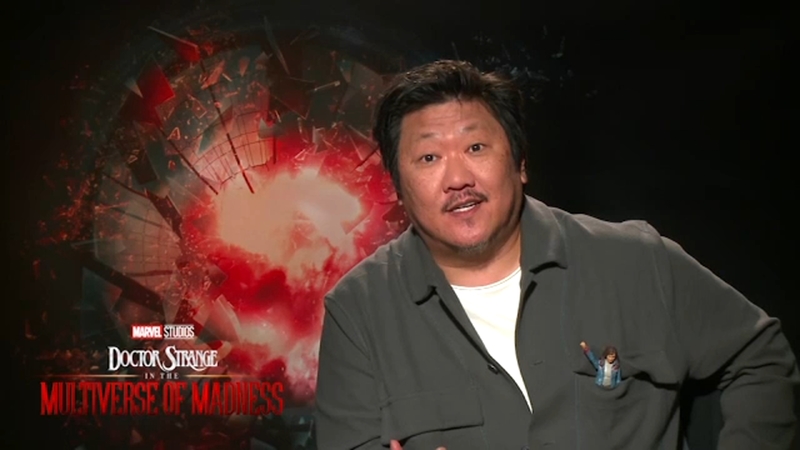 The long wait is over! The much-anticipated "Doctor Strange and the Multiverse of Madness" opens this week.

The Marvel action movie faced many pandemic delays but now fans are finally about to experience the big-screen fantasy.

ABC7's Hosea Sanders talked to one of the stars, Benedict Wong, who said it's a dream come true.

Hosea: "It must be really great to be a part of this whole Marvel Universe and this case 'Multiverse.'"

Wong: "Ahh! It's absolutely fantastic! You know, for someone who was 14, collecting all the Spider-Man comics, cut to being an actor and getting a chance to meet Stan Lee and to be involved in the MCU, playing a character called Wong."

That's right, the actor is back on the screen playing a sorcerer also named "Wong."

Hosea: "How has Mr. Wong evolved over this time?"

Wong: "We've now seen Wong, who's this no-nonsense librarian to the no-nonsense Sorcerer Supreme, so anything is possible and the possibilities are endless."

RELATED: What to expect, what Marvel madness to revisit before new 'Doctor Strange' movie hits theaters

Hosea: "Talk to me just a bit more about the importance of cultural representation in this universe."

Wong: "You know, the amount of texts and messages that I got from Asian friends feeling good about themselves, feeling represented. The music, seeing directors. You know, behind the scenes it matters so much more because the chances are so few and far between, and when people do and seeing everyone shine like that, it can only be an amazing thing."

"Doctor Strange and the Multiverse of Madness" is hitting some theaters Thursday and others Friday. Advance ticket sales are already through the roof.

RELATED: Marvel's 'Doctor Strange and the Multiverse of Madness' premieres in Hollywood