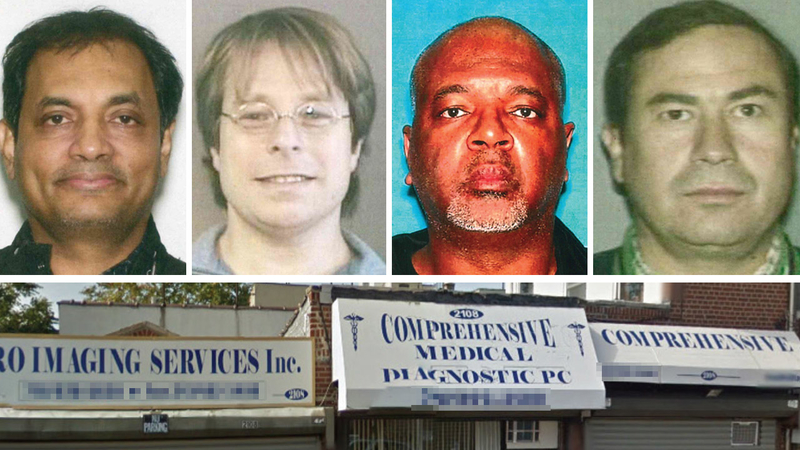 The 878-count indictment was announced Tuesday by the Brooklyn District Attorney's Office and covers three years of alleged fraud.

They targeted low-income areas -- including a soup kitchen in the East New York section of Brooklyn and a job center in the Bushwick section -- and paid people cash of $30 to $40 in exchange for going to a clinic for unnecessary tests, prosecutors said.

Prosecutors said in one instance, an undercover officer was recruited and paid $30 to undergo tests at a clinic. The officer spend about an hour there with no doctor present. Records later showed that the office billed for 18 separate tests for that visit, which had they all been performed would have taken more than 12 hours to complete.

Here's a look at mugshots for each of the people charged, as released by the Brooklyn DA's Office:


The alleged ring leader was 35-year-old Kristina Mirbabayeva, of Bridge Street in downtown Brooklyn. Dr. Custis is accused of being her business partner.

Other high-level people accused of being involved in the scheme include: Vladislav Yakubov, 46, of Brighton Beach, Brooklyn, who allegedly managed recruiting clinics with Kamal Zafar, 49, of South Huntington, New York. The alleged money launderers are Natan Yusufov, 54, of Ocean Parkway, Brooklyn, Igor Shamayev, 47, of Midwood, and Vitalik Ifraimov, 58, of Ocean Parkway.

Court documents allege that those involved in the scheme laundered money through bank account of shell companies, including ones in China, Singapore, Lithuania, Pakistan, Taiwan, and Turkey. The money was then transferred to some of the people charged in the scheme.

The Brooklyn DA's Office released these evidence photos, showing the various locations involved, the apartments purchased and social media photos from one of the suspects:


Brooklyn officials have frozen 11 properties worth more than $10 million and more than 100 bank accounts allegedly belonging to the people charged in the case.

If convicted, those charged in the case could face up to 25 years in prison.

Below is the full list of names of people and companies charged in the case: