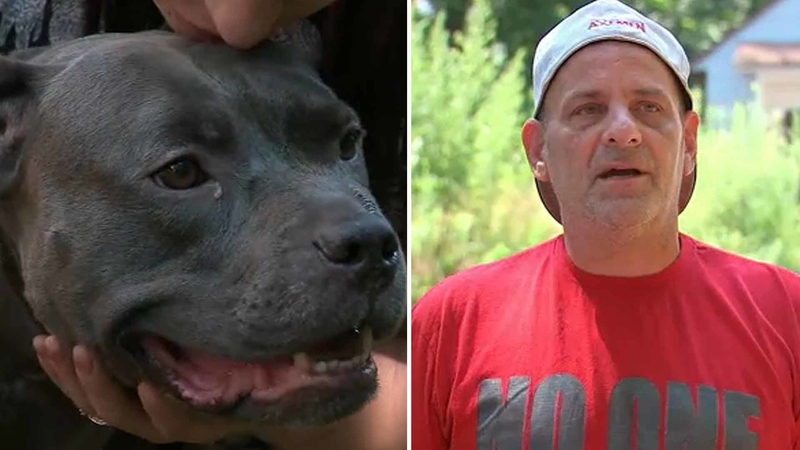 HASKELL, New Jersey (WABC) -- A New Jersey dog owner is speaking out after he says his pit bull was shot in the face by a neighbor.

The incident took place Saturday in the area of DuPont and Makemoney Avenues in Haskell.

The incident took place Saturday in the area of DuPont and Makemoney Avenues in Haskell.

"He's docile, he loves children, he loves kids," Coombs told Eyewitness News. "He'll go in the car with you guys right now and take a ride."

Coombs said he let him out on his property around 10 p.m. Saturday and says he was there when his neighbor shot Relic in the face. The dog was not on a leash, but Coombs says he stayed on his side of a small pond.

On Monday, Wanaque police arrested Owens who lives next door.

The dog was taken to Westwood Regional Veterinary Hospital later where veterinarians determined the dog sustained injuries by a .22 caliber bullet. Initially, the staff was told that the dog was injured by fireworks.

"Part went to the back of his throat, part was stuck up in his nose, so they had to take the fragments out in different places," Coombs said. "The vet said another centimeter over would've killed him."

Coombs says Relic is a family dog and is great with babies, children and even strangers.

"They're saying they thought it was a coyote," he said. "Parents have been here for 50 years, never been any coyotes here."

Owens was released and is scheduled to appear in court on August 7, 2020.

The Passaic County Prosecutor's Office asks anyone with additional information about this incident to contact them on their tips line at 1-877-370-PCPO or tips@passaiccountynj.org or contact the Wanaque Police Department at 973-835-5600.