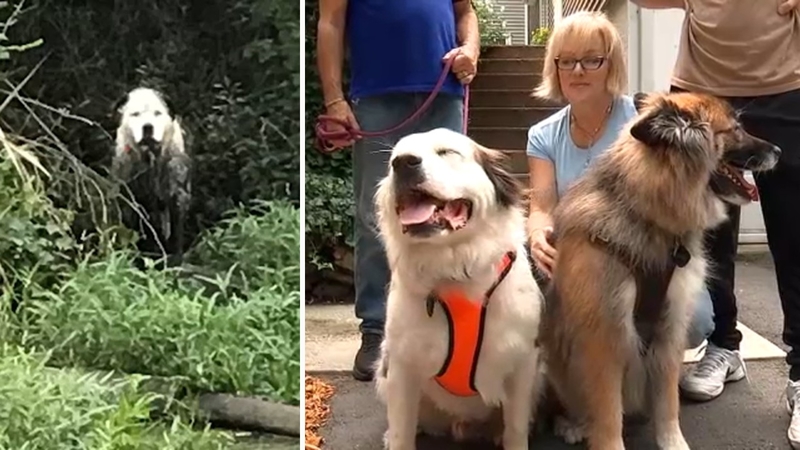 BETHEL, Connecticut (WABC) -- A pair of runaway dogs in Connecticut ran right into trouble when one of them got stuck in a swamp - but fortunately the other pup managed to find help.

A very good boy named Moose was caught in a very bad spot: stuck in a swamp about a mile away from home.

Moose and his brother had run off into the woods and it was Bubba who ran up to two strangers to let them know there was trouble.

"He's was jumping around frantic and he ran back down, so this wasn't a natural spot for a dog to really be coming from, so we were going to follow him anyhow, but he came back and forth a few times like Lassie would," said good Samaritan Brian Sharp.

Sharp and his co-worker Peter Kokias could see Moose and borrowed a boat to cross the water-filled with muck as thick as quicksand.

They thought rescuing Moose would be fairly simple.

"But he wouldn't let us grab his collar, he was a little skittish, so we got some food from the house, tried that, that didn't work either, we were able to get close to him, but not that close," Sharp said.

Moose continued to evade his rescuers. As the hours dragged on, Moose's owners got in touch with the men and a new rescue plan was launched.

"This is a Tuesday night at like close to midnight, and Brian's like 'I'm not going to give up until I get your dog back,' and who says that," owner Michele Novella said.

Novella was frantic and it was now pitch dark.

Her sons got into the boat with Sharp and upon hearing familiar voices, Moose stopped darting about and got on board.

But there was one last leg of the adventure. The boat was now so heavy that Kokias had to pull them all back to shore.

"The emotion that came of me, I just fell on top of him," Novella said.

The families are now forever linked. The dogs have been reunited and are now sporting GPS collars.