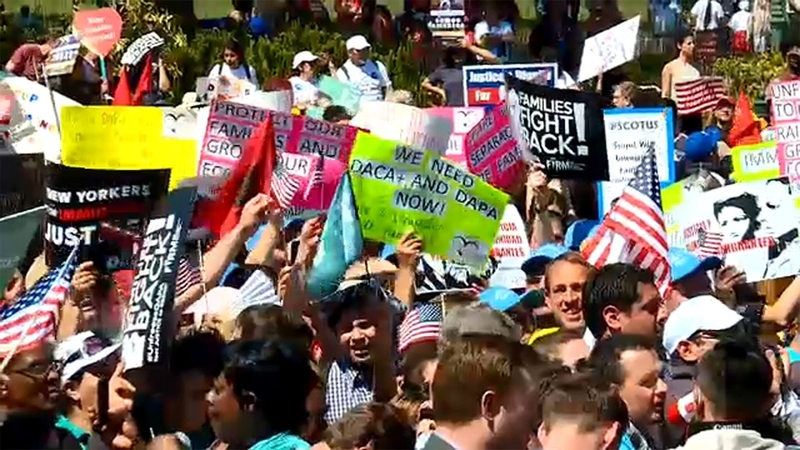 NEW YORK (WABC) -- Sources tell ABC News that President Donald Trump is leaning toward ending an Obama administration decision to allow the children of undocumented immigrants to stay in this country.

Carlos Vargas came from Mexico with his parents when he was 4. He's now 31 and going to law school.

Like nearly 800,000 other young undocumented immigrants he was given a break by President Obama under a program called DACA.

It stands for Deferred Action for Childhood Arrivals. It established that immigrant children shouldn't be punished for what their parents did.

But now President Trump is considering doing away with the program.

"When we applied for DACA we did our part, we passed a background check, we gave them our address, we gave everything, right? So does that mean if the program ends does that mean they're going to put us in removal proceedings?" Vargas said.

Back in January the president told ABC News that those young people had nothing to fear.

But now several states, led by Texas, are threatening to sue to end the program.

The move comes as President Trump threatens a government shutdown, unless congress provides money to pay for his wall on the Mexican border. That's of course different from what he said during the campaign.

Immigration advocates say after the violence in Virginia two weeks ago, the president needs to send a kinder, more inclusive message to the nation.

"I think it's his moment to stand up post Charlottesville that he's not going to succumb to white nationalists's white supremacist, neo-Nazi agenda, that he's actually going to do what's right for this country and protect DACA," said Javier Valdes, Make the Road New York.

Without the protection of DACA, people like Vargas could be deported and thousands of immigrants across the country would have reason to worry all over again.