Young women in Florida dress as 'grannies' in apparent attempt to get COVID-19 vaccine, official says

The Orange County Sheriff's Office released bodycam video of the two young women after they were discovered posing as "grannies" to get a COVID-19 vaccine.
WABC 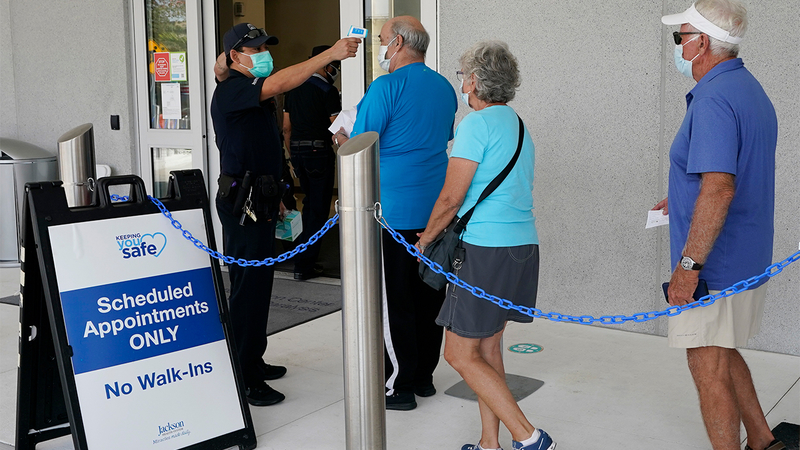 Women dressed as 'grannies' turned away from vaccination site: Official

ORLANDO, Fla. -- Young women in Florida dressed up as older women in an apparent attempt to qualify for COVID-19 vaccination, a local official said Thursday.

Dr. Raul Pino, the director of the Florida Department of Health in Orange County, said the women arrived at a vaccination site "dressed up as grannies" in bonnets, glasses and gloves but were turned away. The women appeared to be in their twenties, he told reporters.

Pino said the young women were coming for their second dose of the vaccine and had valid vaccination cards from their first dose. Pino didn't know how they got through the vaccination process the first time. He hinted that there was an issue with the women's photo identification the second time around.

The Orange County Sheriff's Office released bodycam video of the two women after they were discovered. "You know what you've done? You've stolen a vaccine from somebody who needs it more than you. And now you're not going to get your second one. So that's a whole waste of time we just wasted here on this," one officer could be heard saying in the video.

The Orange County Sheriff's Office released bodycam video of two women who dressed as older women to get the COVID-19 vaccine after they were discovered.

"If you come back, you'll be arrested. You're lucky you're not being arrested right now."

The situation has been referred to the county sheriff's office for further investigation, Orlando ABC affiliate WFTV reported.

Security has been beefed up around vaccination sites, Pino said.