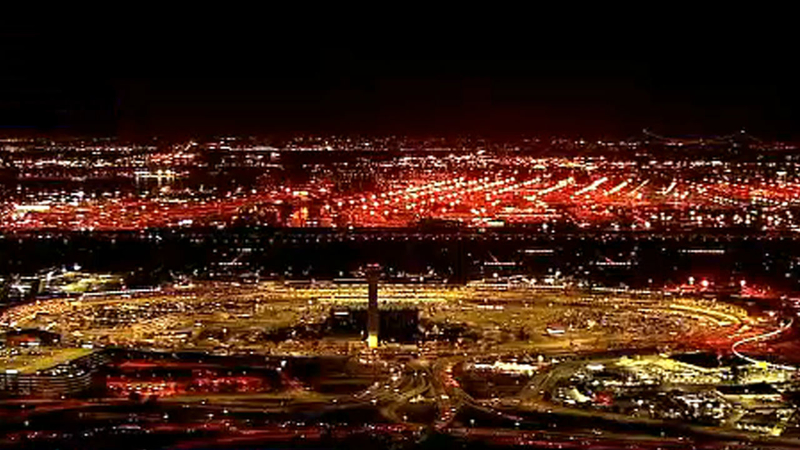 According to the FAA, there were two reports of a drone spotted around 3,500 feet above Teterboro Airport in Bergen County, prompting a police helicopter search around the airport.

All arrivals to Newark airport were placed on hold for a few minutes around 5:30 p.m.

The pause in arrivals started when a Southwest flight from Phoenix reported a dangerous sight: "Be advised there's something on final here we don't, we thought maybe it was a drone, uh, but there's, uh, definitely, uh, something on final here."
Air Traffic Controller: "And you say something on final, I'm not sure what you mean. Like an object or something?"
Southwest 476: "Yes sir, an object and it definitely looks like a drone. It was pretty close. I'd say within, uh, I would say, a quarter mile at most off our right."

Some flights were held at their destinations before departing in order to slow the pace of incoming traffic, sources told ABC News.

Brett Sosnik was on a United Airlines flight bound for Newark when the pilot told passengers that they would be circling in the air because of a drone spotted in Newark airspace. Sosnik, who was returning from the Bahamas, said his plane circled for about half an hour.

"I was looking around trying to find a drone in the air when we were closer to landing, but I didn't see anything," said Sosnik, a New York City resident who works in marketing. "There's got to be a way to combat that stuff and not have it affect huge airports with such a little piece of technology."

"At first it said we were going to land in 10-12 minutes and a few minutes later the screen changed and it said 52 minutes," said a passenger named Marissa, who was on her way back from Iceland.

In the end, the landings resumed when police found no drone. Adam Lisberg, spokesman for one of the biggest drone manufacturers, said he is skeptical that's what it was in the first place.

"A drone, it could be the size of a dinner plate or even smaller than that," he said. "If I were driving at 150 miles an hour, I don't think I could spot something the size of a drone sitting by the side of the road. I think it's even harder to do that in an airplane."

He suggested it could have been debris.

United Airlines spokesman Robert Einhorn said the impact on its operations "has been minimal so far."

Normal airport operations resumed later in the evening. The airport says it is coordinating with the FAA and supporting federal law enforcement authorities as they investigate the incident.

In the U.S., unless the operator gets a waiver from the FAA, drones are not allowed within 5 miles (8 kilometers) of most airports, and are not supposed to fly above 400 feet.