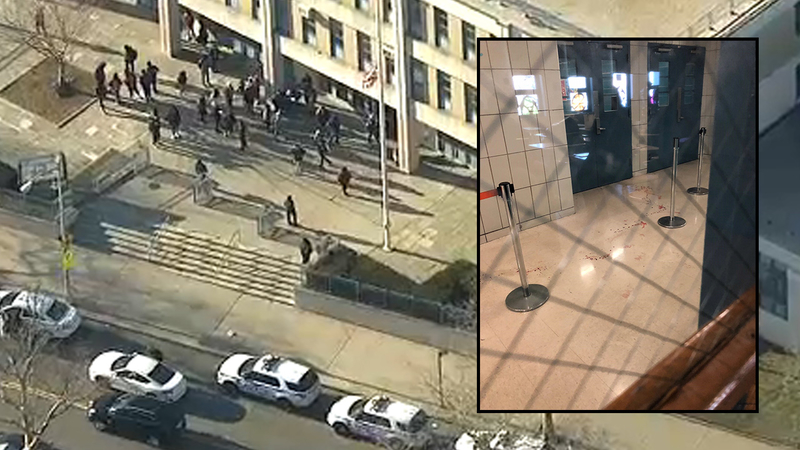 BAYSIDE, Queens (WABC) -- A 14-year-old boy was slashed in the head during an altercation at a high school in Queens Tuesday morning, and police later arrested a 15-year-old classmate.

It happened inside Benjamin N. Cardozo High School in Bayside around 8:50 a.m.

The victim, a freshman, was taken to North Shore-Long Island Jewish Hospital with minor injuries. He is said to be the son of a school safety agent.

Police launched an intense manhunt inside the school for the suspect, believed to be a fellow ninth-grader.

The school was placed on lockdown as a result, and most students were moved to the auditorium as their parents waited outside.

"He was running through the hallways, then he ran into the bathroom," student Jonathan Pinkhasov said. "Then he was running around asking for help."

Pictures from students showed blood splattered around the hallways.

"It was in the bathroom and the gym area," student Arianna Glenn said. "You couldn't really leave the building, because I guess they thought he was still in the school."

The lockdown ended just before noon, although the suspect wasn't located at that time. He was later arrested and charged with assault and criminal possession of a weapon.

"I just came immediately here, so it's disgusting that this is going on here," one parent said. "And this happens to be one of the best schools in Queens."

The weapon has not yet been recovered. There are no metal detectors at this school.

"This is what they're seeing," parent Nora Gonzalez said. "This is what life is now, in this era for them, so it's horrible."

The New York City Department of Education released a statement saying, "The safety of students and staff is our top priority, and NYPD and EMS immediately responded to a serious incident at Cardozo High School this morning where a student was transported to the hospital in stable condition. We are working with NYPD as they conduct an investigation, and are taking additional safety measures at the school."