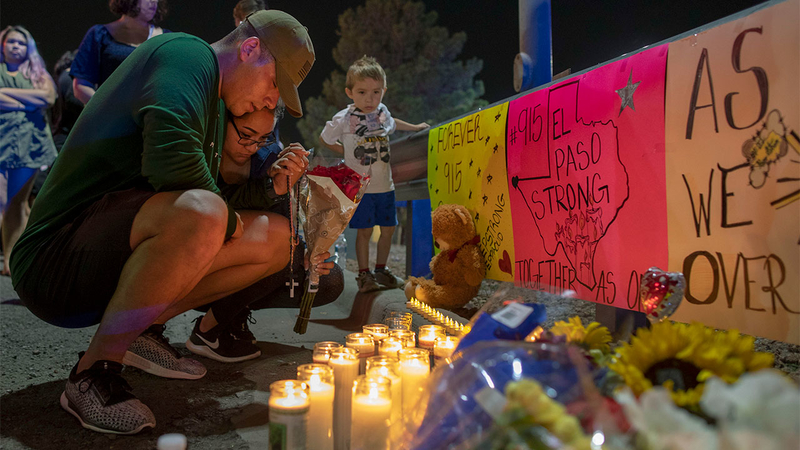 EL PASO, Texas -- As the death toll from the El Paso shooting this weekend climbs, the investigation continues into the man who is suspected of targeting Mexicans in what Mexico's government is calling "an act of terrorism."

Authorities say the 21-year-old suspect entered the packed Walmart at Cielo Vista Mall once on Saturday morning without a weapon. They say he was casing the store, looking for Mexicans, before he returned with a weapon.

On Monday, two more people died in the hospital, bringing the death toll to 22. At an emotional press conference, officials with the Del Sol Medical Center said the son of one of the deceased patients complimented the doctors and nurses for their hard work.

Officials said that 15 patients remain hospitalized, two of whom are in critical condition, in connection with Saturday's shooting. Nine have been discharged.

Also on Monday, local officials shared the identity of those who were killed. Mexico's Foreign Ministry said that eight of its citizens were among the dead. More than a dozen Americans and one German national were also killed. No first responders were among those killed or injured.

President Donald Trump is planning to visit El Paso on Wednesday, according to Dee Margo, the city's mayor. The White House hasn't announced the trip but the Federal Aviation Administration has advised pilots of a presidential visit that day to El Paso and Dayton.

Margo said he's "already getting emails and phone calls" about welcoming Trump to town. Democratic lawmakers and some residents have said Trump isn't welcome in the largely Latino border city based on his past anti-immigrant rhetoric.

Law enforcement officials earlier identified the suspect as 21-year-old Patrick Crusius of Allen, Texas. Police believe the suspect may have been armed with a rifle.

Esparza announced that his office will seek the death penalty against Crusius. Federal prosecutors have a "view toward" bringing federal hate crime and firearm charges against Crusius, John Bash, the United States attorney for the western district of Texas, added.

Bash said authorities are treating the shooting, which "appears to be designed to intimidate a civilian population," as a case of domestic terrorism.

The El Paso police chief said authorities are examining what he called a "manifesto" that they believe was written by the shooter and shows a possible "nexus" to a hate crime.

SEE ALSO: 'I feel like they were a part of me': Army soldier saved children during El Paso shooting

An eyewitness told ABC News Radio in an interview that the shooter was dressed in cargo pants and wore ear protection. She said he began to fire in the parking lot and saw him shoot multiple people in cold blood.

From there, she said, the shooter walked into the store. She characterized his demeanor as calm and confident as though "he was on a mission."

There were as many as 3,000 people in the store during the busy back-to-school shopping season, authorities said.