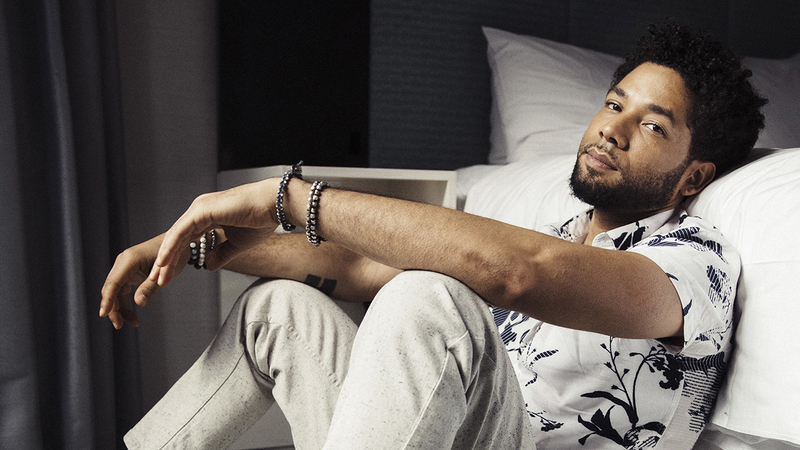 CHICAGO -- Jussie Smollett, an actor on the TV show "Empire," was attacked early Tuesday in Chicago's Streeterville neighborhood in what Chicago police are investigating as a possible hate crime.

The attackers allegedly struck Smollett in the face with their hands and poured a chemical on him. Police said one of the individuals wrapped a rope around his neck during the attack before they both ran away.

When Smollett contact police at about 2:42 a.m. he was still wearing the rope around his neck, Guglielmi said. Chicago police plan to analyze the rope as part of their investigation. The chemical substance is believed to be bleach, but police had not independently tested his sweatshirt as of Tuesday afternoon.

Authorities are looking for any evidence or video from the area between 1 a.m. and 3 a.m., as well as anyone who was near there at the time of the attack.

UPDATE: We continue to seek any available evidence/video to identify possible offenders in this case. Anyone who may hv been in area of 300 E North Water St btwn 1-3a should send info to https://t.co/g9Q1Srtgmc. Thus far we have not found anything to be able put out a description pic.twitter.com/wxdA0OOjZz

Smollett was able to make it to Northwestern Memorial Hospital, where he was listed in good condition, police said.

Prior to the attack on Jan. 22, Smollett had received a letter threat sent to the FOX studio in Chicago which had threatening language and was laced with powdery substance, likely Tylenol.

The FBI is investigating that threat.

The actor confirmed to CNN's Don Lemon over the phone that the attack took place. Smollett said he fought back, and is shaken and angry that something like this could happen.

In "Empire," Smollett plays Jamal Lyon, who is gay. In real life, Smollett has also come out as gay. He has been on the FOX show since 2015. On Tuesday, 20th Century Fox Television and Fox Entertainment released this statement:

"We are deeply saddened and outraged to learn that a member of our EMPIRE family, Jussie Smollett, was viciously attacked last night. We send our love to Jussie, who is resilient and strong, and we will work with law enforcement to bring these perpetrators to justice. The entire studio, network and production stands united in the face of any despicable act of violence and hate - and especially against one of our own."
Anyone who has information pertinent to the investigation should call Area Central at 312-747-8382. Tips can be submitted anonymously at www.cpdtip.com.

Some celebrities and organizations posted tweets of support on Tuesday:

I'm just now hearing the news about the senseless hate attack on my #EMPiRE Nephew @JussieSmollett IM SO ANGRY AND HURT ABOUT THIS! THIS MUST STOP!! SPREAD LOVE NOT HATE! PRAYERS UP TO U NEPHEW! 😢😢🙇🏾‍♀️🙇🏾‍♀️ pic.twitter.com/p4GqfNW3An

I’m deeply horrified and saddened by the racist and homophobic attacks against @JussieSmollett. He is a kind and profoundly talented soul whom I respect with all my heart. The terror of racism and homophobia has no place in our society, it is the most indecent way to live...

Our hearts are with @JussieSmollett today. This attack must be investigated thoroughly. According to @antiviolence, the severity of hate violence against LGBTQ people is increasing: https://t.co/hN0yNJEmov https://t.co/acWmjzBBzW