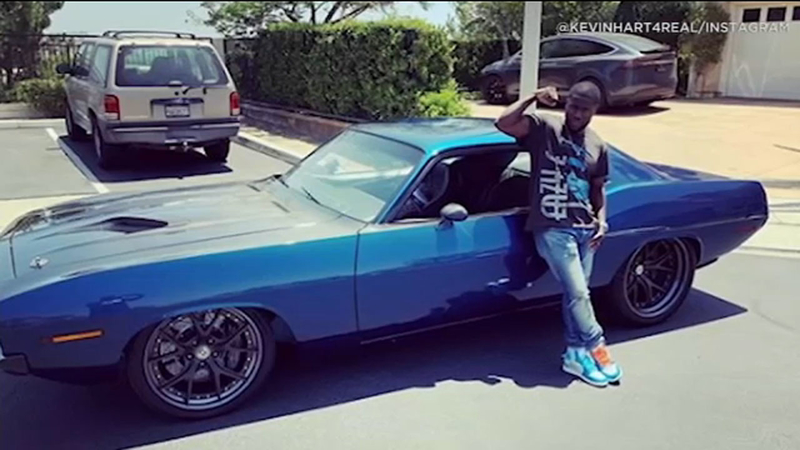 CALABASAS, Calif. -- The 911 calls from the Malibu car crash that left comedian Kevin Hart severely injured have been released and reveal the seriousness of the collision.

Hart was injured in a crash Sunday around 12:45 a.m. in the area of Mulholland Highway and Cold Canyon Road, according to the California Highway Patrol.

CHP said the comedian's 1970 Plymouth Barracuda went off the side of the highway.

One of the 911 callers said the roof was crushed.

"The roof is crushed. The car is pretty totaled. The door is smashed in. The A pillar is crushed into the front of the dash," the caller said.

The initial CHP report says when the CHP arrived, Hart had left the scene to get medical attention at his nearby home.

It states 28-year-old Jared Black was found in the driver's seat, and another passenger, Rebecca Broxterman, was trapped in the car.

But the 911 call from the witness appears to describe Hart as the driver.

An operator asks the caller if everyone in the vehicle is awake.

"Yeah, they're both awake. Sounds like the passengers stuck in the car. The driver is out of the car," the caller said.

At about 2:13 a.m., a second 911 call is made from Hart's Calabasas home by an unidentified woman.

She asks for an ambulance for Hart, and says he was in a crash just minutes before.

The woman described Hart as immobile.

"I don't know what happened... He's not coherent at all," the woman told the operator.

Hart is now in the hospital recovering from serious back injuries.

Black is also in the hospital with serious injuries, while Broxterman was not hurt.