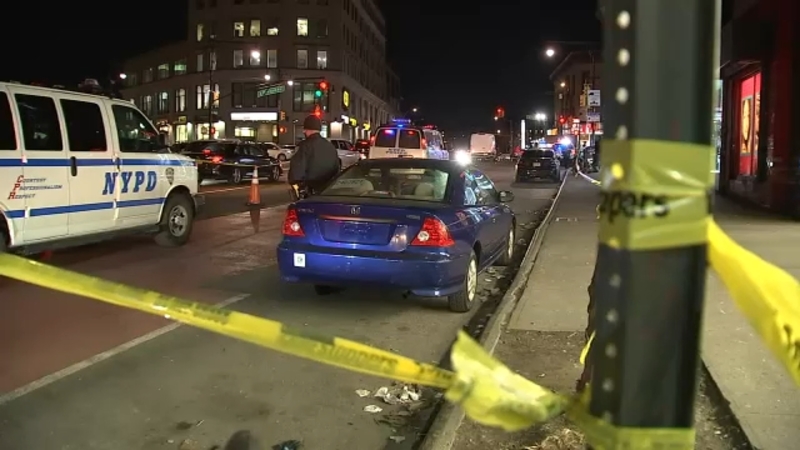 NEW YORK CITY (WABC) -- On a day that saw over a half-dozen shootings across New York City, an emotional Mayor Eric Adams decried years of bureaucratic failings that he linked to the shooting death of Jayquan McKenley, an 18-year-old aspiring rapper killed in Brooklyn Sunday.

"The story of Jayquan breaks my heart," Adams said. "His story tests my spirit, and we must do better for young people like him. I was once a Jayquan too."

There were at least nine shootings reported Thursday across multiple boroughs, with at least nine people added to the list of victims -- with two fatalities -- as gun violence continues to plague the Big Apple.

By nightfall in the city, one man was shot in Manhattan, one in Queens, three in Brooklyn and four in the Bronx.

Adams, in a speech that City Hall cast as a step in the mayor's plans to curtail gun violence that involves more than traditional policing, repeatedly said the city should have done more to help kids like McKenley.

"We have betrayed an entire generation of Black and Brown children of color who are at risk," Adams said.

At 5 years old, McKenley entered his first of seven homeless shelters. He started kindergarten at P.S. 723 in the Bronx, a school for kids with severe cognitive disabilities, but after two years was moved into a traditional elementary school where he fell behind in reading and math.

"Jayquan's mother begged the school for more help," Adams said. "But Jayquan was unable to get it. Our city should have done more."

He attended five different high schools and programs, and he was often absent. He missed over 250 days of school, "a clear sign he needed more help," Adams said. "Our city should have caught that. We should have done more."

McKenley was arrested multiple times between 2018 and 2021, including for attempted murder.

"He was part of a scene that uses music as a challenge on social media posts," Adams said. "Posts that bled out to violent real word confrontations. It was right there for all to see. Our city should have done more."

"I want our Housing Department to find them homes," he said. "Our social services teams must help them navigate the system and give them every support they need. Our chancellor must find ways to get them in class and on track. Our police officers must find ways to keep them safe, and our justice system must work to make sure to keep them out of jail and ensure they have second chances."

He hopes taking steps to pre-empt kids turning to gangs will help stem the tide of gun violence long term.

Two 40-year-old men were shot in front of 1161 Willmohr Street in the Brownsville section of Brooklyn around 2:30 p.m. Thursday.

One was shot multiple times in the chest and later died at Brookdale Hospital. The second man was shot in the arm and is in stable condition. He is expected to survive.

The second fatal shooting of the day took place inside of residence in Jackson Heights, Queens around 6:45 p.m. when an 18-year-old man was shot in the abdomen and killed. He was taken to Elmhurst Hospital.

The string violence started early Thursday, when a 39-year-old livery driver was grazed by gunfire on Ocean Avenue in Brooklyn. Detectives say he was approached by a man who walked up to the car and fired for no obvious reason.

It happened outside the PS 152 Annex, less than two hours before the start of school.

Three hours later, a 61-year-old man was shot in the arm in the Bronx. Two hours after that, a New York City sanitation worker was shot and wounded in the middle of West 52nd Street in Manhattan.

Investigators say he was shot while intervening in a dispute between his daughter and his daughter's boyfriend. The wound to his leg was not life-threatening.

Gunshots were also reported on East 115th Street in East Harlem, though no injuries were reported in that incident.

Then around 4:15 p.m., police responded to shooting on Webster Avenue in the Bronx. Police say a 15-year-old male was shot in front of the location. He is in stable condition and recovering at Jacobi Hospital.

Less than an hour later, police say a woman walked into the same hospital after suffering a gunshot wound to the ankle. She was shot on White Plains Road and Guerlain Street and is expected to survive.

Also in the Bronx just three hours later, a 23-year-old man was shot in the arm on Davidson Avenue just after 8 p.m. He was taken to St. Barnabas Hospital where he's expected to survive.