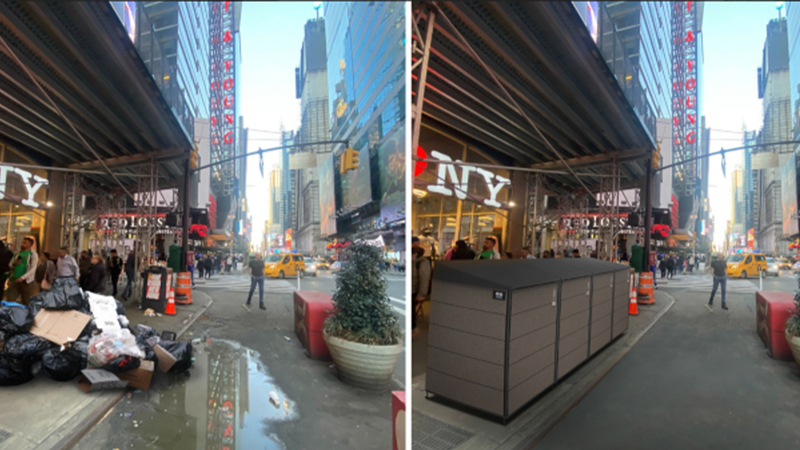 The Clean Curbs Pilot program will place the new bins all five boroughs, and officials say it will reduce the convergence of rodents, improve aesthetics, and take back parts of city streetscape currently overburdened by piles of garbage.

The program will include possible tests in business improvement districts (BID) and for both residential and commercial waste, and it beings in one of New York City's busiest corridors: Times Square.

"Environmental justice begins at the street level, and it starts now," Adams said. "Clean streets are vital to vibrant neighborhoods and to New York City's economic comeback. We need to stop dodging black garbage bags and instead fund and test container models throughout the city that will make our streets cleaner and more inviting for both New Yorkers and visitors."

The Times Square bins are the first example of DSNY's Clean Curbs Pilot Program and will test sealed containers that hold trash collected from sidewalk litter and nearby litter baskets.

Currently, many litter baskets are cared for by the local association, which monitors litter baskets, and, when full, places bags next to baskets for collection, increasing capacity for the litter baskets but at the same time making trash accessible to rodents.

The new containers will act as a centralized site to hold bags in a sealed atmosphere prior to collection.

The Times Square Alliance installed two containers, which they maintain, one at 41st Street and 7th Avenue and the other at 43rd Street and 8th Avenue.

The pilot is just one initiative underway in the Clean Curbs programs. DSNY and the Department of Small Business Services recently announced the Neighborhood Challenge grant program for BIDs and community-based development organizations to make public space and cleanliness improvements with a particular focus on BIDs in underserved communities.

Applications for the first round of funding are due this Friday, and a second round of grant applications will open this summer.