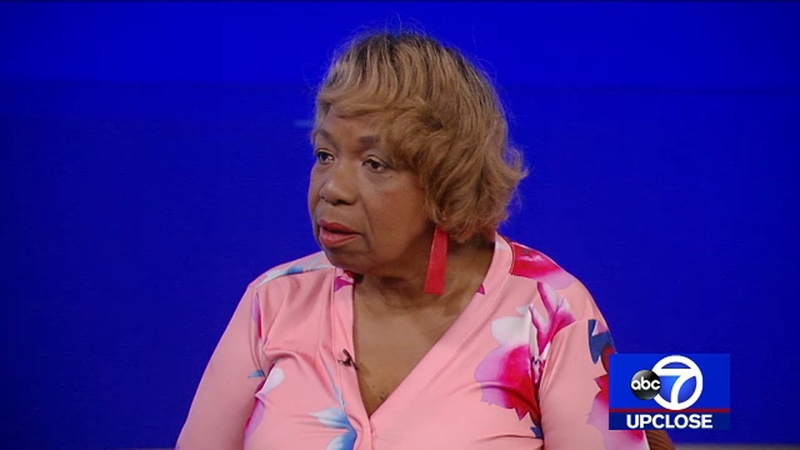 NEW YORK CITY (WABC) -- Eric Garner's mother, Gwen Carr, told Bill Ritter during a taping of Up Close the decision to fire Officer Daniel Pantaleo did not provide a sense of justice, but "a sense of going in the right direction."

Carr said Mayor de Blasio should have acted sooner rather than wait for the case to go through the courts or the federal government to act.

NYPD Commissioner James O'Neill, also appearing on Up Close, said he made that decision alone, calling it "one of the most difficult things" he's had to do.

He said he has not spoken to Eric Garner's mother or to PBA President Pat Lynch, who was sharply critical of Pantaleo's firing, since he announced his decision Monday.

The full interviews can be seen on Up Close on Sunday morning at 11 a.m. on Channel 7.

Earlier, a police union criticized the disciplinary action taken against an NYPD sergeant in connection with Garner's death.

But the Sergeant Benevolent Association says Adonis isn't guilty of failure to supervise -- because she was not the supervising officer on the scene.

They say that another sergeant, the patrol supervisor, was never brought up on any charges at all while Adonis spent three and a half years on modified duty.

"We've always felt the decision to bring disciplinary charges against Adonis irresponsible," SBA President Ed Mullins said. "Sergeant Adonis arrived seven to 10 seconds after the alleged chokehold was concluded. She never saw the alleged chokehold and had no knowledge that it even happened until hours later when she was shown a video by the Internal Affairs Bureau."

Instead of being subjected to a departmental trial like Pantaleo, who was terminated earlier this week, Adonis agreed to be docked 20 vacation days without admitting any guilt.

Still, Mullins called the decision to bring her up on charges at all a reckless one.

"No reason was ever given as to why it took the NYPD months to bring disciplinary charges against Sergeant Adonis," he said.

It's a question that as answered by O'Neill Thursday morning.

"Through conversations with the Department of Justice, they asked us to hold off on moving forward with our administrative trial," he said. "And in the summer of 2018, they said we could go ahead. They gave us the green light."

"(PBA President) Patty Lynch is doing what he thinks he should do for the membership," he said. "But he needs to be careful not to destroy their confidence."

NYPD Chief of Department Terence Monahan took it a step further, calling the PBA's recommendation to the rank and file to use "extreme caution" when making arrests "pretty bad advice" that could endanger officers' lives.

He did acknowledge low morale among some officers, but he blasted any directive that officers hold back in any way when making arrests.

"I know as a result of the Pantaleo decision there's a hell of a lot of anger and frustration going out throughout the entire department right now," he said. "If you hesitate, you could get yourself killed."

PBA officials have visited precincts across the city, armed with a one-page handout instructing officers to summon a patrol supervisor and other officers to "every job involving a possible arrest situation" and wait for the backup to arrive unless facing a matter of life or death.

Officers are advised to "confer with the patrol supervisor" before making any arrests, and document any and all instructions they receive in their memo books.

"Anyone who is going to hesitate when they are about to lock up a bad guy is endangering their own lives," Monahan said. "We do not give criminals the upper hand in an arrest situation."