'He was everything to everyone': 21-year-old widow mourns sanitation worker killed in hit and run 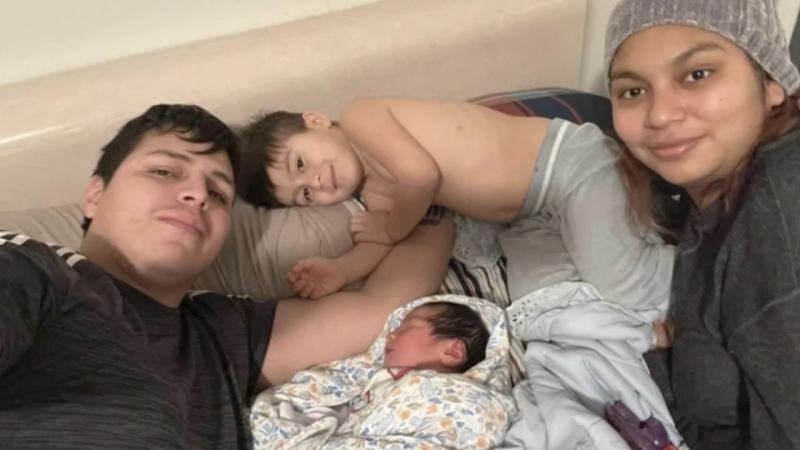 Sanitation worker killed, another hurt in NY hit and run

NANUET, Rockland County (WABC) -- A sanitation worker was killed and another injured when they were struck by a car while crossing the street to collect trash receptacles in a hit and run in Nanuet.

It happened in the area at 17 South Second Avenue around 6 a.m. Friday, when the victims were struck by a vehicle that fled the scene.

Arriving officers located one of the victims unresponsive lying in the roadway, while the second man was seated on a nearby curb experiencing pain and difficulty breathing.

The driver of the garbage truck described hearing a loud collision when the men were struck.

Both victims were initially treated by officers before being transported to area hospitals, where one of the victims, Estibe Bustos Ceballos, died two days later.

"He was everything to everyone," Caballos' widow, Erica Chicaiza, said. "He was the full support for us."

Chicaiza, Ceballos' high school sweetheart and the mother of their two young sons, is now a widow at age 21.

Police later arrested 29-year-old Christain Lemus-Vasquez and charged with leaving the scene of an accident with serious injury.

"Maybe if he stopped, maybe if he called, maybe my husband would have a little more time or at least I would have one word," Chicaiza said. "I didn't even have a goodbye. Nothing."

A GoFundMe page has been set up by Spring Valley head football coach Andrew Delva to help Ceballos' family.

Delva said the victim was a former player who was loved by many on the team.

"Devastated, shocked, hurt," he said. "Somebody who was so good of a person, it's definitely something that has a big effect on everybody."

Delva remembers when Ceballos joined the team as a 14-year old who had just moved to the US from Ecuador. He barely knew English and knew nothing about American football, and off the field, he worked two jobs while in high school.

"You talk about literally right after a game, he would shoot out, go right to work," Delva said.

Now, a family and a community are struggling to come to grips with a devastating loss.