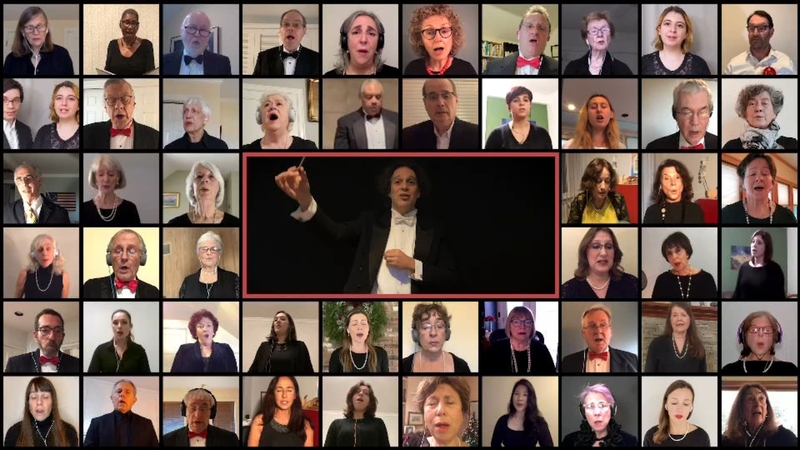 NORWALK, Connecticut (WABC) -- The 100-member Fairfield County Chorale and its Music Director David Rosenmeyer are offering a free online streaming event to provide an artistic and meaningful exploration of choral music in a digital setting.

The COVID-19 pandemic has not been kind to the performing arts, but this group of singers in Connecticut is determined to survive and even thrive.

For more than half a century, they have found joy together, but now it's been more than nine months since they last shared a stage.

"A chorus is a little bit of a metaphor for what society could be," Rosenmeyer said. "Different people from different shapes, colors, last names, and political affiliations getting together to do something beautiful."

It was beautiful until the pandemic silenced them abruptly.

"It became not an issue of when the Fairfield County Chorale was going to sing again, but whether the 58-year-old institution could survive," singer and board member Bill Hooks said.

"The key is we're not ready yet to do it live," Rosenmeyer said.

The technology just isn't there, given the group has more than 70 singers participating. As anyone who has used zoom knows, there's a lag time.

"There is a difference of milliseconds sometimes, and we're not exactly together," Rosenmeyer said.

Instead, he came up with a system in which each singer records his or her part individually on a phone or computer, and then Rosenmeyer puts all the parts together and adds visual elements as well.

The members had no idea if it would work, said Hooks, and that's when one of his old friends from Brown University chimed in.

"I got to tell you, I really, really miss the audience," said James Naughton, a veteran performer who has won two Tony Awards, the first for originating the role of Billy Flynn in "Chicago."

He's earned standing ovations too often to count, so you trust him when he says, "It's something else when you've got an ice cold camera staring you in the face, and there's nothing else there."

In the end, everyone involved came to trust the process, and now, the visual show is finished.

"(It's) so gratifying" Hooks said. "It's been a pleasure and a moving experience to be part of."

And yes, the group has definitely decided to stay together.

The best part is that the virtual show on Sunday afternoon is free, but a reservation is required to gain access.