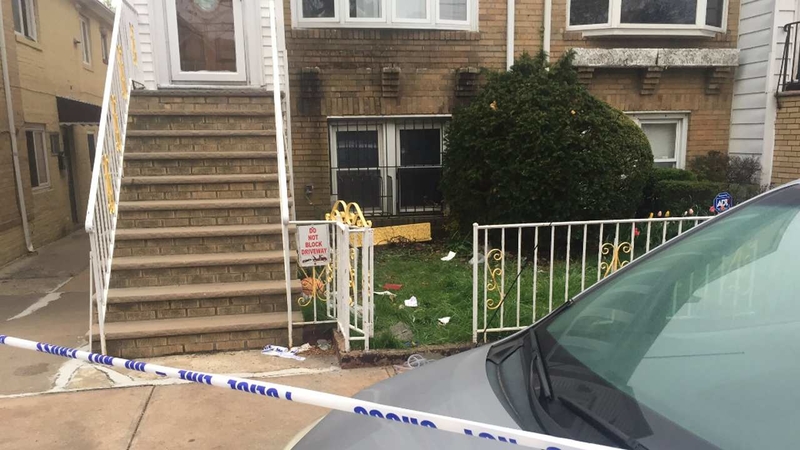 Boy killed after planter falls on him in Brooklyn

MARINE PARK, Brooklyn (WABC) -- An 8-year-old boy died after he was struck by a falling planter box in Brooklyn on Thursday afternoon.

It happened in front of a two-story home on Ryder Street in the Marine Park section around 5:25 p.m.

Kevin Reilly was apparently trying to climb up the window of the home to get a basketball when he grabbed onto the planter box at the second floor. It then fell on his head, killing him.

The box was filled with wet soil, and was so heavy, neighbors said his mother couldn't even get it off of him.

"I saw mom was crying, screaming. She was saying, 'someone call 911'," neighbor Fateme Kabir said.

Kevin was rushed to Coney Island Hospital where he was pronounced dead.

"What I could see from my attic she was trying to lift that piece, but that's the only view I had," neighbor Rahadel Kabir said. "She couldn't really lift it. It turned out two gentlemen ran over before I could get there tried to get there and tried CPR."

"It's devastating," one neighbor said.

"It's just terrible. It's tragic," another neighbor said.

The street was filled with kids when it happened. Witnesses said the boy was hanging off the ledge, playing, when laughter turned into cries for help.

"Who would've thought that a potted plant could be so dangerous? It's just awful," a neighbor said.

Neighbors said he has an older and younger sister.

"I saw the little sister when he was laying on the ground; she was crying and screaming," Fateme said.

City inspectors from the Department of Buildings are investigating the circumstances.

The home next door has a planter box just like the one that fell. In fact, many homes in the neighborhood do. Residents are making sure the planters are secure, and keeping their kids away.

Neighbors said the family had recently moved in.