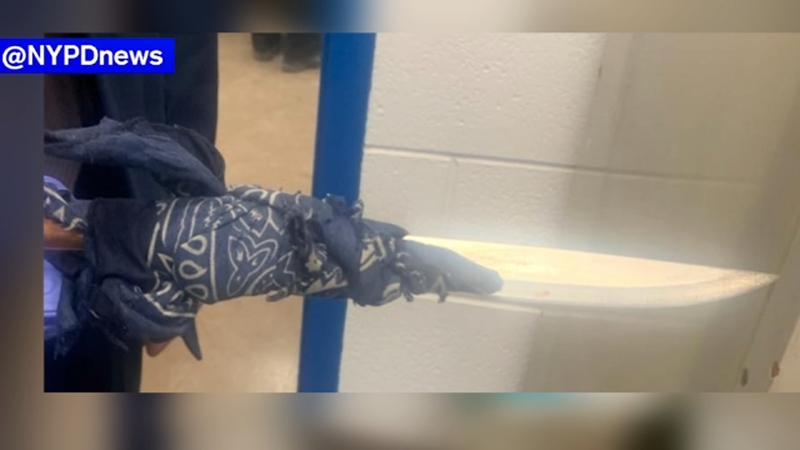 Subway stabbing suspect had knife on him when he was arrested

WASHINGTON HEIGHTS, Manhattan (WABC) -- A man was arrested and charged Sunday in connection with a string of subway attacks that left two people dead.

Police say 21-year-old Rigoberto Lopez is charged with murder and attempted murder in four separate attacks on the A subway line.

Within 24 hours, Rigoberto Lopez was apprehended for stabbing four people in separate incidents occurring on the A Train, which left two dead and two with serious injuries. pic.twitter.com/qf4s1xa50f

Authorities say when they caught him, he still had a knife in his possession and was wearing the same clothing he was seen in on surveillance video.

Police said Lopez is likely homeless, his last known address is a homeless shelter in Brooklyn.

Deputy Chief Brian McGee said the attacks were unprovoked, and the victims did not initiate anything. He also said that Lopez was previously hospitalized for mental illness.

The crimes are just the latest in a string of violence in the subway across the city.

In Saturday's violence, officials investigated four total incidents, two of which were fatal, of stabbings and slashings that occurred on A line subway trains in less than 24 hours between Friday at 11:20 a.m. and Saturday at 1:28 a.m.

Officials say a man was found with numerous stab wounds to his neck and torso onboard an A train around 11:30 p.m. Friday night stopped at the Mott Avenue subway station in Far Rockaway, Queens.

EMS arrived and pronounced the unidentified victim dead at the scene.

Violence broke out on Friday night during an apparent anti-NYPD protest.

Just two hours later, Claudine Roberts, 44, was found with several stab wounds throughout her body on an A train at West 207th Street and Broadway around 1:30 a.m.

EMS also arrived and pronounced her dead at the scene.

Officials say the two victims appear to have been homeless.

According to police, two more stabbings occurred at an A line subway station on West 181st Street in which a 43-year-old and 67-year-old were stabbed.

Both survived and were taken to area hospitals where they are recovering.

One of the injured victims was able to give police a description of the suspect.

As police investigated the two separate killings, the NYPD on Saturday vowed to deploy 500 additional officers to patrol the system.

With Saturday's deaths only the latest in a mounting toll of violence, calls rang out for beefed-up efforts to protect the subways.

"More than a year ago, Governor Cuomo and the MTA Board called for an increased police presence across our system to keep our employees and the riding public safe, and we're glad the City and NYPD have agreed to add 500 additional NYPD officers to the system. The recent horrifying attacks demonstrate that these officers are a strong step forward, but more must be done. We continue to face an acute mental health crisis that has been exacerbated by the pandemic and we need additional dedicated resources to address this challenge."

He said the NYPD will increase patrols on the New York City transit system with an additional 500 officers.

"We will immediately commence a surge of officers to patrol both above and below ground to ensure that everyone that rides on our transit system on a daily basis not only is safe, but just as importantly, feel safe," Shea said. "This surge will result in an additional 500 offices, which is a significant increase to the staffing of our transit bureau, and they will be deployed immediately throughout New York City."

Shea said the increased deployment would include officers working on both straight time and overtime.

The MTA is now calling for 1,000 more officers to be deployed into the subways.