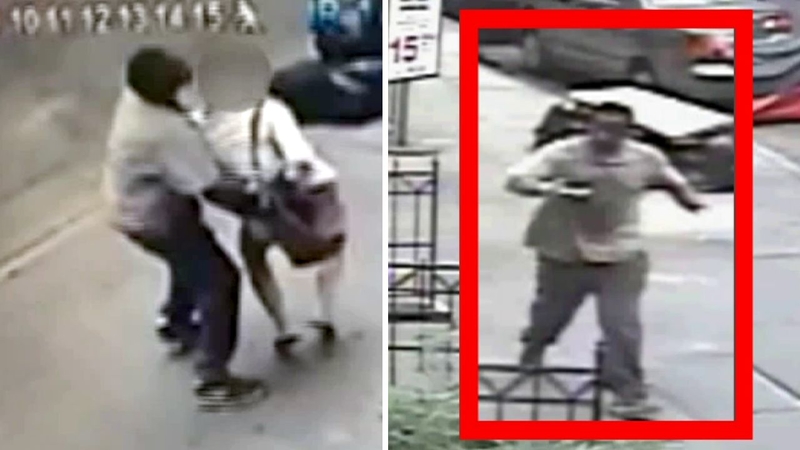 Feces attack suspect linked to another attack on Upper East Side

UPPER EAST SIDE, Manhattan (WABC) -- New York City police are looking for a man who stuffed a bag of feces down a woman's pants as she walked in Manhattan, and authorities have now linked the man to a second incident.

Authorities say the 27-year-old victim was walking on East 74th Street near First Avenue on the Upper East Side around 6 p.m. Monday when the man came up from behind, grabbed her by the waist and shoved a bag of feces down her pants. He then grabbed her buttocks, tossed what appeared to be a rubber glove on the sidewalk and fled the scene.

Felix Martinez, the garage attendant working where the victim ran in, described what happened next.

"That somebody threw *expletive* in her pants, and she was crying," Martinez said.

She came running to him for help with what he says looked like dog feces right after the incident.

"She was terrified, she was shaking, she couldn't talk, and tell me 'please help me, somebody attacked me,'" Martinez said.

Police on the UES search for man who shoved bag of feces down woman's pants as she walked https://t.co/vAzSruKTpp pic.twitter.com/tohgcctlcN

NYPD Chief of Detectives Robert Boyce said a similar incident occurred 17 blocks away on East 91st Street a few hours earlier, in which the suspect threw feces and struck his 33-year-old female victim in face and torso. It is unclear if there was a bag used in that incident.

"Really disgusting attacks," he said. "We think its the same male...a completely deranged person from what we can tell."

Police described the suspect as a 40-year-old man, believed to be homeless, standing about 6 feet tall and weighing 200 pounds. He has a dark complexion and an Afro hair style.