23 injured as fire burns through building in the Bronx 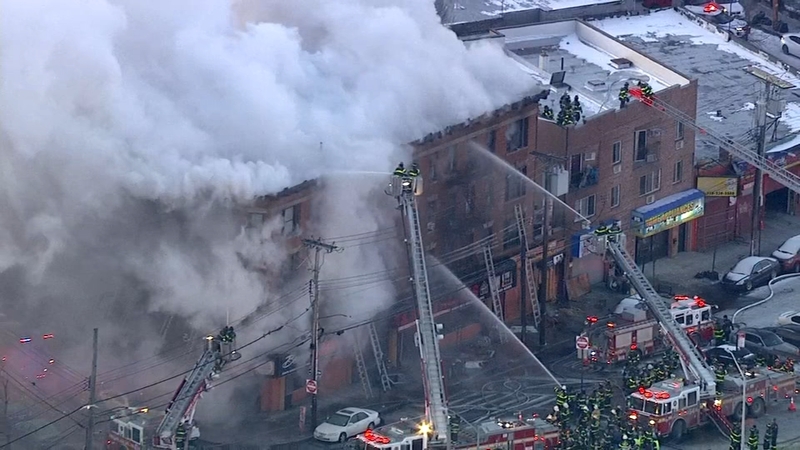 VAN NEST, Bronx (WABC) -- At least 23 people were injured and 60 displaced after a seventh-alarm fire tore through an apartment building in the Bronx Tuesday morning.

The fire started in a furniture store on the first floor of the building on Commonwealth Avenue in the Van Nest section just after 5:30 a.m.

The injured include 22 civilians and one firefighter, but luckily, all of the injuries are considered non-life-threatening.

On the frigid morning, firefighters had to battle more than just the flames but the cold as well.

A heavy icing condition was reported on streets around the building.

PHOTOS FROM THE SCENE

More than 400 firefighters responded, forced to battle the fire from the street after the intense smoke and flames drove them from the building before they were able to search all of the apartments.

FDNY Assistant Chief Roger Sakowich said a thorough search was eventually conducted, and there were no reports of unaccounted for residents.

Firefighters broke windows to get people out of the building as the fire continued to burn, and one woman ran down the hall banging on doors to try and get her neighbors out. Another resident, Erica Ortiz, escaped with her two children and dog. She was getting ready for work when she smelled smoke.

"I woke up my husband, my kids and said listen there's a fire in the building," Ortiz said. "By the time we opened the door in the hallway, there was black smoke."

Derick Waller had an update from the scene:

The cause of the fire is under investigation, but does not appear to be suspicious.