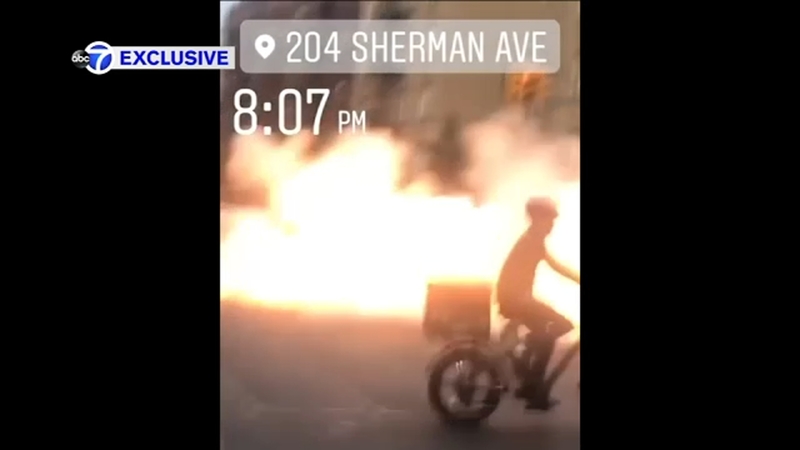 NEW YORK CITY (WABC) -- Just one day after an Eyewitness News exclusive of a massive fireworks explosion in Upper Manhattan as part of our Crime Stoppers series, the NYPD has a person in custody.

The suspect, 32-year-old Tomas Tavares, is accused of mixing M80s and flour to create the huge blast on Sherman Avenue in Inwood last Friday.

"He was very remorseful," NYPD Chief of Detectives James Essig said. "He was just setting off fireworks."

"The flour creates smoke in the explosion," Essig said.

He has six prior arrests and is said to be a reputed Trinitarios gang member.

Detectives are trying to determine where Tavares got the fireworks and if he has any more.

"A 911 caller described it as a bomb going off, and if you look at the video it's quite disturbing," Essig said. "It's unacceptable in New York City. "It's shocking. It's shocking that that could go on."

Illegal fireworks are nothing new in New York City.

Last June, a 3-year-old boy was hit by a firework fired from the street that went in through an open sixth-floor window.

He suffered burns and a cut to his head that needed stitches.

"We've seen it in the last couple of weeks, where the fireworks are ramping up, and it's a quality of life issue," Essig said. "We've seen people lose fingers, get seriously injured, but in this particular incident, you have someone riding by on a bike. You have a school across the street."