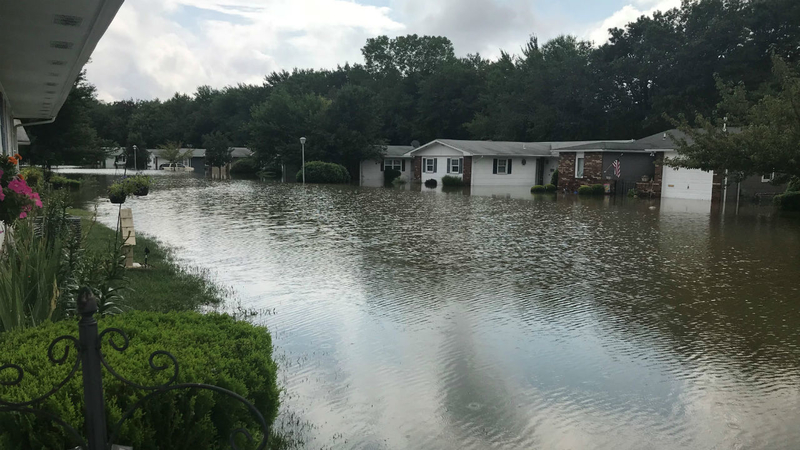 Brick Township, New Jersey reported almost two months of rain in a matter of hours as rescuers evacuated dozens of people as the flooding sparked a state of emergency.

Families in the Green Briar Community in Brick Township let us come along as they waded flood waters to see what was left of their homes. @ABC7NY pic.twitter.com/uL9mMaYTDw

The township urged citizens to stay off of the roads as more rain was expected.

Brick residents who were displaced are being assisted by the Red Cross at a clubhouse in the Green Briar community.

In Neptune, a tree fell into a home during the heavy rain and winds Monday morning. Olive Street was closed after the incident because wires were taken down in the fall.

Fallen tree onto a home on Olive Street during the heavy rain and winds earlier this morning. No occupants were inside at the time, wires were taken down and the road remains closed.

AccuWeather says rainfall rates of an inch per hour are possible with any of these showers and thunderstorms.

Authorities have already declared a state of emergency in Little Falls after flooding wreaked havoc on Saturday when 5 inches of rain fell in less than an hour.

RELATED: What to do if you're returning to a flooded home

Families were trying to clean up as the rain continued to fall. Many have lost parts of their lives: appliances, photo albums, kids' toys and winter items stored in the basement that are now destroyed and coated in mud.

"We are devastated," Fran Richards said. "Everything in the basement flooded, cars floating, it's devastating."
EMBED More News Videos

Lucy Yang reports on the flood damage in Little Falls.