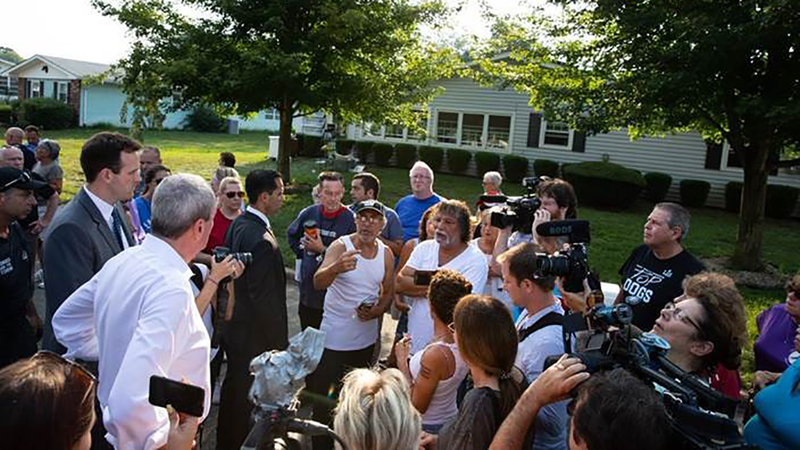 "It's 50 years of no flooding here," Murphy said amid repeated questions about why the Greenbriar I senior community badly flooded Monday afternoon. "So its probably a combination of an extraordinary amount of rain and something else."

Murphy acknowledged speculation that nearby reconstruction of the Garden State Parkway may have exacerbated the flooding, and he also heard rumors of "a pipe blocked up."

"We are trying to figure out, collectively, how this thing happened when there was no flooding for 50 years," he said. "There is no easy answer. I feel badly about that. There just isn't. We are doing everything we can, I promise you."

He said the matter is being investigated by state and county engineers.

Residents told Murphy of crooked contractors and potential price gouging by local hotels, and local officials warned them not to pay contractors with cash.

"You mentioned the hotel, this is another thing the mayor (John Ducey) just said," Murphy said. "Watch out for contractors who don't have their heart in the right place, who are trying to scam you."

Ducey said he knew of 200 homes in Brick damaged by flood waters, and he said the number is rising.

Several residents of Greenbriar I invited Murphy into their storm damaged homes, with one telling him the house flooded in 20 minutes and she had to be rescued by boat.

"We lost everything," one resident pleaded to Murphy as he walked past pile after pile of ruined furniture.

Murphy declared a state of emergency in five counties Monday after a weekend of heavy rain and flooding. He signed an order declaring emergencies in Bergen, Essex, Monmouth, Ocean and Passaic counties.

Weekend rain dumped from 5 to 8 inches on several towns, surpassing the expected rainfall for all of August.