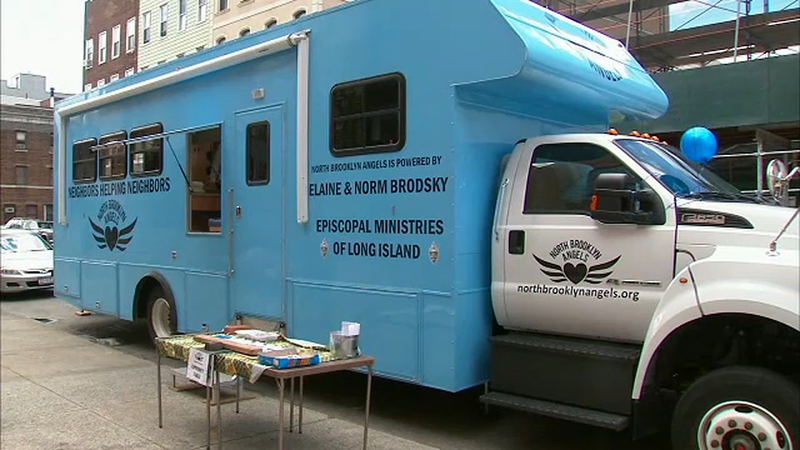 GREENPOINT, Brooklyn (WABC) -- Food trucks are a staple of the fast-paced New York City lifestyle, but one Brooklyn food truck does more for the community than dishing out quick and delicious meals.

The "Angelmobile" is a sort of a "soup kitchen on wheels," said Neil Sheen, co-founder of the nonprofit North Brooklyn Angels.

Originally, the North Brooklyn Angels served the Bedford-Stuyvesant community with a brick-and-mortar soup kitchen, St. John's Bread of Life on Lexington Avenue, but in order to reach more people in need, they started thinking outside the box.

"We started to talk to community people and decided to do a mobile soup kitchen and as well as a mobile social service ... in order to engage various needs in the community," said John Merz, another co-founder.

So in June 2017, they launched the "Angelmobile," a food truck that frequents five North Brooklyn locations in need: 862 Manhattan Avenue in Greenpoint; 275 N. 8th Street and 195 Maujer Street in North Williamsburg; the Cooper Park Houses in East Williamsburg; and 240 Division Avenue in South Williamsburg.

"We had a theory, a model," Sheen said. "We had no clue it was going to work out or not. It's been happening bigger and better and faster than we could ever imagine."

In total, the "Angelmobile" serves about 1,000 meals per week. Although these neighborhoods are known for expensive condos and swanky restaurants, they exist in tandem with a great deal of food insecurity, Merz and Sheen learned.

"This truck is meeting needs in each area. It's a mobile unit. It serves the need of the meals, but it also serves as a great catalyzing force to bring people together to do the volunteering," Merz said.

Both Merz and Sheen are happy with the "Angelmobile's" success, but long term, they want to partner with social service professionals, hospitals, the mental health providers and more.

"Getting involved is the most gratifying thing," Merz said. "You put a little water in the flower and it starts to grow and then eventually it's not yours. It's just this thing that's in the world. So it's exciting to see."