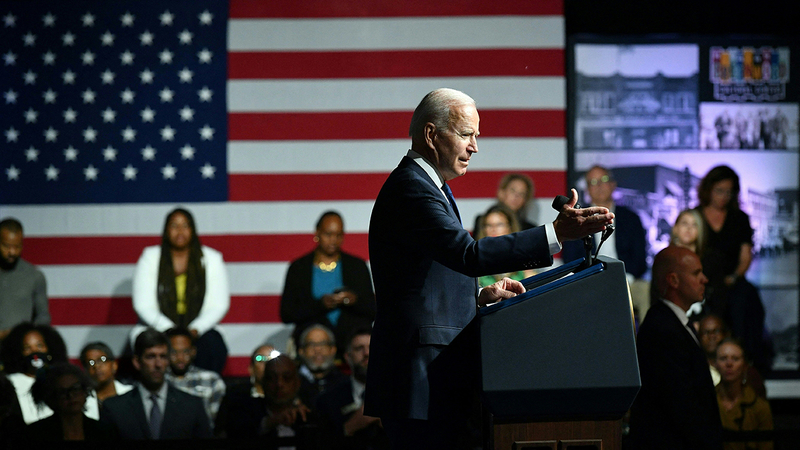 WASHINGTON -- Lawmakers will resume a slate of tense negotiations this week over voting rights, infrastructure and police reform as President Joe Biden's agenda enters an important week on Capitol Hill.

Looming large over the deliberations is the July 4 recess in the Senate, which begins at the end of the week and could encourage real momentum just as easily as it could disrupt it.

The Senate on Tuesday is set to vote on whether to advance the so-called For the People Act, a sweeping elections bill that currently lacks Republican support.

But Democrats are looking to the vote as a chance to showcase unified support within their party and create a clear contrast with Republicans over the issue of voting access in America.

As a result, all eyes are on Sen. Joe Manchin.

Last week, the West Virginia Democrat left open the option that he could support a modified bill after previously opposing the drafted legislation. He said he's open to backing several of the provisions in the For the People Act, including declaring Election Day a public holiday, expanding early voting to at least 15 consecutive days and banning partisan gerrymandering.

But in return for his crucial support, Manchin wants to require identification to vote, which many progressives view as discriminatory toward racial minorities, but which Republicans see as essential to deterring potential voter fraud.

"Sounds like I'm open to doing everything I possibly can to protect American democracy," Sanders, an independent from Vermont who caucuses with the Democrats, said when pressed by CNN's Dana Bash on "State of the Union" if he supports Manchin's proposal.

But even if enough Democrats rally around Manchin's counter proposal, he has long said that he believes any changes of this magnitude must also have the backing of Republicans -- an exceedingly unlikely prospect.

GOP Sen. Lindsey Graham made that much clear on "Fox News Sunday," calling the For the People Act "the biggest power grab in the history of the country" and Manchin's proposal still too ambitious.

"Well, one, I like Joe Manchin a lot, but we had the largest turnout in the history of the United States and states are in charge of voting in America. So I don't like the idea of taking the power to redistrict away from state legislators. You're having people move from red -- blue states to red states," the South Carolina Republican said.

"Under this proposal, you would have some kind of commission, redraw the new districts, and I don't like that. I want states where people are moving to have control over how to allocate new congressional seats."

"So, as much as I like Joe Manchin, the answer would be no," he added.

The sweeping For the People Act, which was passed by the House in March, would bar states from limiting voting by mail, would require prepaid postage on absentee ballots and would mandate voter registration on the same day as the election. It also effectively would overturn voter ID laws by requiring states to allow voters to submit sworn statements in lieu of identification.

Negotiations over the legislation come as 14 states have already enacted at least 22 new laws restricting voting this year, according to the Brennan Center for Justice at New York University.

And more Republican-controlled state legislatures have joined the march to limit access to the ballot box, motivated by former President Donald Trump's unfounded claims that voter fraud contributed to his White House loss in 2020.

Most of the new laws make it harder to vote absentee and by mail, after a record number of Americans voted by mail in November.

Infrastructure at a crossroads

Democrats for weeks have pursued two tracks in negotiations over President Joe Biden's infrastructure proposal -- a bipartisan route and a more partisan route that would potentially allow them to pass a bill with only Democratic votes through a budget process known as reconciliation.

White House officials view this week as crucial in their efforts to secure a bipartisan agreement and they entered Monday with a level of optimism something can get done, sources say. It's expected that President Joe Biden will make this the centerpoint of his week. There will be calls. There will likely be an Oval Office meeting. The biggest caveat being they defer to Democratic negotiators on what will or won't be helpful.

The White House is largely aligned with the bipartisan proposal on the spending side, but are still searching for the right mix of potential ways to pay for it. White House staff has been drafting technical language in an effort to assist the Democratic members of the bipartisan group in bridging the gap on the issue, the sources say.

Biden is confident if a deal is reached he can find a way to quell the concerns of the left. But White House officials know one of the ways to do that will be some sort of promise from Democratic Sens. Joe Manchin of West Virginia and Kyrsten Sinema of Arizona that they'll be good to go on the reconciliation package down the road. So far neither has been willing to give that assurance. White House officials know Biden will need to play a major role in locking that in.

Champions of each have grown louder in recent days alongside an urgency to make some progress.

Sanders on Sunday said it's urgent that Democrats work toward an infrastructure package with a larger price tag that addresses climate change and other related issues. "I sometimes think we get boggled down in numbers and that's important, but we've got to look at what the needs are of the American people, what's going on right now," he told CNN.

Asked if he had Biden's blessing to push a separate $6 trillion reconciliation plan, Sanders said the President provided a "serious and comprehensive blueprint."

But some moderate Democrats, including Manchin and Sen. Jeanne Shaheen of New Hampshire, are squeamish about the large price tag of Sanders' plan and some have indicated they would not support it.

A bipartisan group of 58 moderate House members proposed a $1.25 trillion infrastructure package earlier this month. The bill proposes $761.8 billion in new infrastructure spending over eight years, but Republicans and Democrats in both the House and Senate are still negotiating over how to pay for the new spending.

White House officials are at the very, very early stages on the reconciliation package. They don't have a timeline on it (though the general idea is late September, early October) and know it's going to be an arduous and politically fraught process. They're letting House and Senate leadership lead the way on that for the moment as they stay involved from afar. They have their priorities, as already laid out by Biden's Jobs and Families plan. They expect they'll be included. But they aren't taking any hardlines at the moment.

Democratic Rep. Josh Gottheimer of New Jersey and Republican Rep. Brian Fitzpatrick of Pennsylvania, co-chairs of the Problem Solvers Caucus, in a joint interview on Sunday, expressed optimism for the bipartisan infrastructure proposal while also acknowledging some members of Congress won't support the package.

"This is about physical infrastructure and something that's urgent that needs to get done and we've got bipartisan support for it. ... I believe we can get this done," Gottheimer said. "You're always going to have some that disagree, but this is what this is about, just continuing to work at it."

Fitzpatrick, meanwhile, said the negotiators should consider all possibilities to pay for the bill, including an increase to the gas tax -- something the White House has refused to support.

"Should everything be on the table? Of course it should be, because that's part of compromise," Fitzpatrick said. "Nobody will be totally in love with the plan but everybody will be okay with it."

What's clear is that where Biden comes down will matter, something Graham suggested in his Fox News interview as he implored Biden to take leadership on the infrastructure package.

"I think the difference between this negotiation and the earlier negotiation is we're willing to add more money to infrastructure in this package, and I am hopeful that if the White House and Joe Biden stay involved, we can get there," he said. "I would just say this, 'President Biden, if you want an infrastructure bill of a trillion dollars, it is there for the taking. You just need to get involved and lead.' "

Republican Sen. Tim Scott told reporters last month it's "June or bust" when it comes to the bipartisan effort to craft a legislative overhaul of policing.

That leaves just a small window for Scott and the other two lead negotiators -- Democratic Sen. Cory Booker of New Jersey and Democratic Rep. Karen Bass of California -- to strike a deal that will satisfy both parties.

Negotiations to this point have been defined by a cycle of promising momentum before long holdups as the group works to combine the Democrats' House-passed George Floyd Justice in Policing Act with the Senate Republicans' JUSTICE Act.

Booker said earlier this month there's "a lot of work to be done" but maintained that the parties can still reach an agreement by the end of the month.

"I think we are days, but that could be 30 days or 25 days, who knows, and there's a lot of work to be done in a very short period of time," the New Jersey Democrat told reporters, when asked whether the negotiators are days away or far from reaching a deal.

One of the thorniest issues has been "qualified immunity," a controversial federal doctrine that protects officers accused of violating the Constitution while on duty.

Established by the Supreme Court in 1967, qualified immunity effectively protects state and local officials, including police officers, from personal liability unless they are determined to have violated what the court defines as an individual's "clearly established statutory or constitutional rights." The doctrine can be used only in civil cases, not criminal, and allows victims to sue officials for damages only under those circumstances.

In April, Scott floated a compromise that would shift the burden of responsibility from individual police officers to their employers: police departments. He said at the time the idea of allowing police departments to be taken to court but not individual officers "seems to be resonating" in his talks with both Democrats and Republicans.

"I assume my conference understands where I am, and I'm hopeful and optimistic" about their support, Scott said of the other 49 Senate Republicans.

But as recently as this month, Scott described stark differences over qualified immunity amongst the negotiators.

While Biden has said he supports the George Floyd act, some leaders say if Congress won't act, they want to see the White House reviving Obama-era panels to review policing practices and investigating police agencies in more cities.

Other civil rights activists, however, say the nation needs police reform legislation more than anything and they are hopeful that Congress will pass it and Biden will sign it.