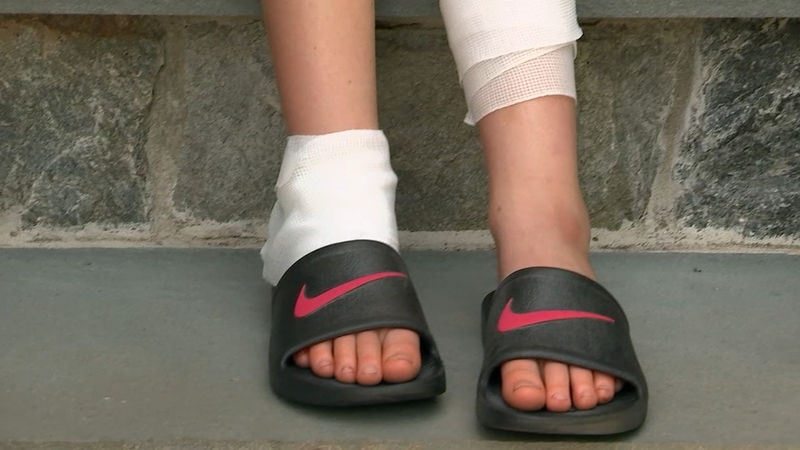 LIVINGSTON, New Jersey (WABC) -- An 8-year-old girl was hospitalized after being attacked by a fox as she walked with a friend near her New Jersey home Wednesday afternoon.

The attack happened as the pair walked along a neighborhood creek a few blocks from her home off Deal Lane in Livingston.

"The fox came, at first I thought it was a dream, but then I just started running because it was standing still," she said. "But then it kept on following me, and that's when it attacked me."

Matt Nichter was playing ball with some neighborhood kids when he spotted the attack and leapt into action.

"I was holding a ball in my hand, so I used that as a bit of a distraction," he said. "And then I kind of chased after the fox, and the little girl ran away, and she was able to get to safety, I guess. I carried her up into the front of the house and calmed her down a little bit. She was a little bit torn up about it, obviously."

A neighbor called Dylan's mom, Stacey Dratch, who discussed what a person does in such a situation.

"I mean, try not to show your kid that you're having a breakdown," she said. "Go into protect mode, and she was OK."

Dylan sustained puncture wounds on her shins and foot.

Fish and wildlife officials are setting traps to catch the fox, and though they are unsure if the fox was rabid, Dylan must undergo treatment for rabies anyway, just in case.

Police say fox and coyote sightings are common in Livingston, and they are urging residents to take extra precautions when they're outside.

"So this is the first time in 31 years that we've had a fox attack a human," Livingston Police Cheif Gary Marshuetz said. "So it is extremely rare, but again, you always want to make noise, be mindful of the fact that a den, they have den or home areas, and they do have pups in the spring."

"Anytime you see an animal behaving oddly, that you just move away from it and leave it be and call us and we'll take care of it," Livingston Police Captain Tom Smith said.