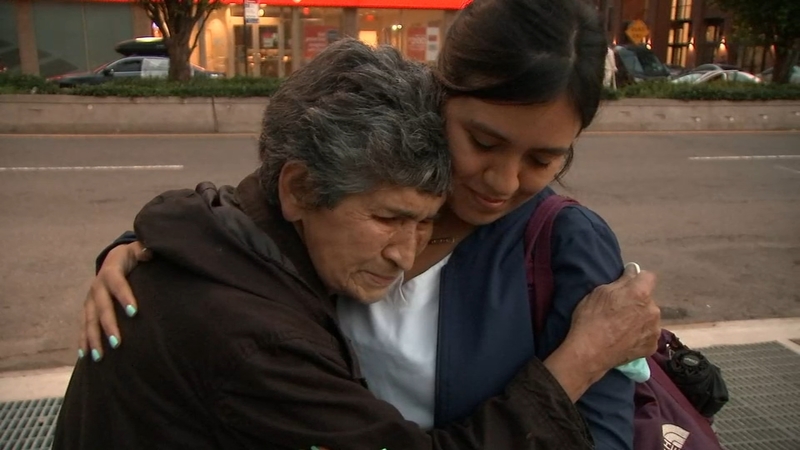 FLUSHING MEADOWS, Queens (WABC) -- The bond between two women who met at a subway station in Queens during the pandemic, was put on display after one of them was randomly attacked and robbed while trying to sell fruit.

She hurt no one, but she was the victim of a brutal and heartless crime.

She said her attacker hit her three times and damaged her eye. She said she can't see correctly and gets dizzy.

It happened one Saturday last month at dusk as Rodriguez was selling fruit in the middle of Flushing Meadows Corona Park. She said her attacker came out of nowhere.

"The minute I saw her with the bruised eye, I was really devastated," Rodriguez's friend Yessenia Loja said. "I tried my best not to cry in front of her but the minute I left her I started bawling.

Loja is a nurse who befriended Rodriguez during her commute to work.

Loja had already raised money online to help her new friend after Rodriguez was ticketed for selling fruit in the subway.
Then came the unprovoked attack last month.

Rodriguez said the assailant knocked her down and kicked her, before ripping her fanny pack off, and stealing $200 of her hard-earned cash.

"I honestly don't even know what type of person would do this to a 75-year-old woman," Loja said. "She was defenseless it was dark she was alone she was the easy target and the was the victim that night."

Police are investigating, but with no video and no witnesses, an arrest seems far off. Which means, no justice for this victim of violence.

Rodriguez said she's still in a lot of pain, but she's back to work anyway. She said she has no other choice.


A GoFundMe page has been set up to help raise funds for Rodriguez's recovery.