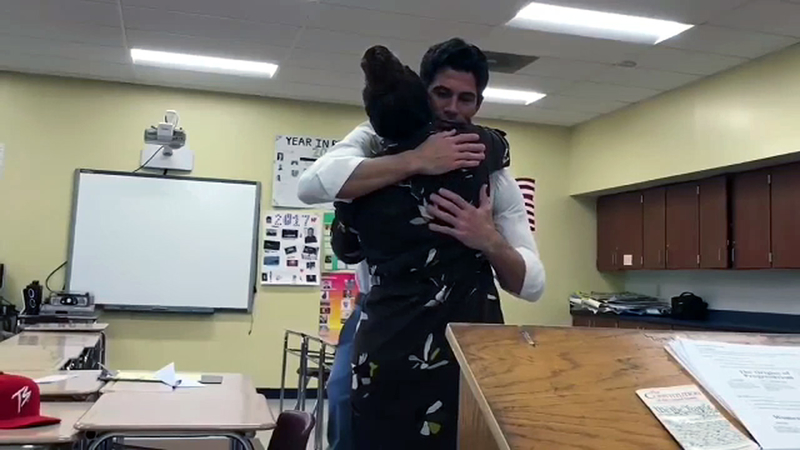 UNION, New Jersey (WABC) -- A high school teacher from New Jersey went above and beyond for the family of a student after learning of their financial hardship.

Nicholas Ferroni is a firm believer that teaching from the heart is what will shape the minds of his students.

"There's no teacher in the world that should say, 'I don't care if you're depressed or upset, I need you to do well on this test,'" he said.

So when the 38-year-old teacher noticed something wasn't quite right with Union High School senior George Hued, Ferroni followed his heart.

It turns out Hued, his mom and younger brother had recently been evicted from their home after a dispute over the lease. His mom, Melanie Robinson, had also lost her job.

Ferroni started a GoFundMe page, and within 48 hours, complete strangers enabled him to surprise her with more than $5,000 Tuesday.

"I was speechless," Robinson said. "Because of that, I was able to pay my rent two months ahead."

Ferroni emphasized he was just the the one who put up the page, but 155 others were kind enough to help.

Still, Ferroni has a following, and it's difficult not to notice him. In fact, People Magazine voted him sexiest teacher alive in 2014.

Ferroni grew up in Union and graduated from the high school, where he's been a teacher for the past 16 years. He's also had plenty of other accomplishments that don't involve his good looks, including an appearance on "The View" when he was recognized for an in-class social experiment in which he taught students how women have been underrepresented in government.

"I'll be 85, and my mom will still introduce me as, 'This is my son, and did you know he's the sexiest teacher alive?'" he said. "Not that I was honored by the United Nations or anything."

But that happened, too, when he was announced as a "Champion of Change."

And in the case of one family, there was change indeed.

"I had peace of mind for the first time in seven months," Robinson said.

And there's no better lesson than that.