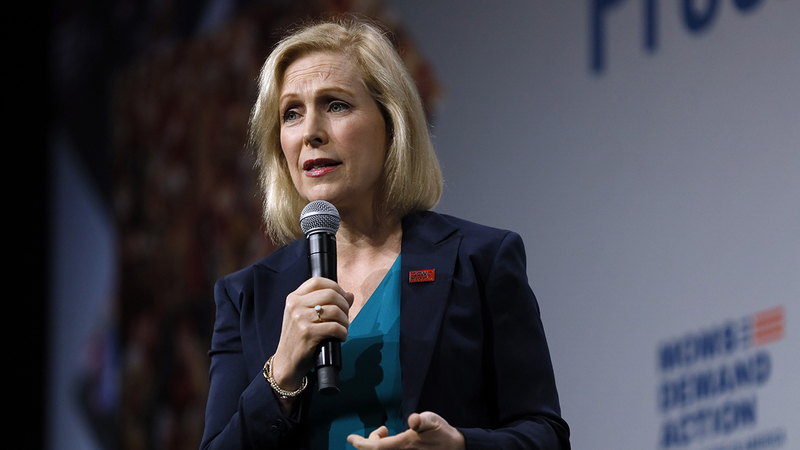 NEW YORK -- U.S. Senator Kirsten Gillibrand has dropped out of the 2020 presidential race.

Gillibrand, who represents New York, tweeted a video announcing the end of her campaign.

"I am so proud of this team and all we've accomplished. But I think it's important to know how you can best serve," she tweeted.

Today, I am ending my campaign for president.

I am so proud of this team and all we've accomplished. But I think it’s important to know how you can best serve.

To our supporters: Thank you, from the bottom of my heart. Now, let's go beat Donald Trump and win back the Senate. pic.twitter.com/xM5NGfgFGT

The 52-year-old senator was among those who were likely not to qualify for ABC News' debate in Houston next month. To appear on stage, she needed to hit 2% in at least four approved public opinion polls while securing 130,000 unique donors.

Gillibrand officially entered the crowded field of 2020 Democratic presidential contenders when she announced her candidacy from a diner in Troy, New York in January.

"I'm running for President of the United States because as a young mom, I will fight for your children as hard as I would fight for my own," she said at the time.

Gillibrand has been among the Senate's most vocal members on issues like sexual harassment, military sexual assault, equal pay for women and paid family leave.

She angered some fellow Democrats in November 2017 when she said former President Bill Clinton should have resigned after his affair with White House intern Monica Lewinsky. She was also the first prominent Democrat to call on her Senate colleague Al Franken to resign after accusations of sexual misconduct from multiple women.

The New York native started her career as an attorney before she was elected to the U.S. House of Representatives in 2006 and re-elected in 2008.

She held that seat until she was appointed to fill Hillary Clinton's vacant Senate seat when Clinton joined the Obama administration in 2008. Gillibrand was re-elected to the Senate in a 2010 special election and again in 2012 and 2018.

My friend @SenGillibrand is a brave voice on some of the most critical issues facing our country today — from childcare to sexual assault. She is a champion and I know she’s not done fighting for women and families everywhere.

Thanks for all you do to represent our great state, @SenGillibrand. Your powerful advocacy has been vital to this race. All the best from me and @Chirlane.