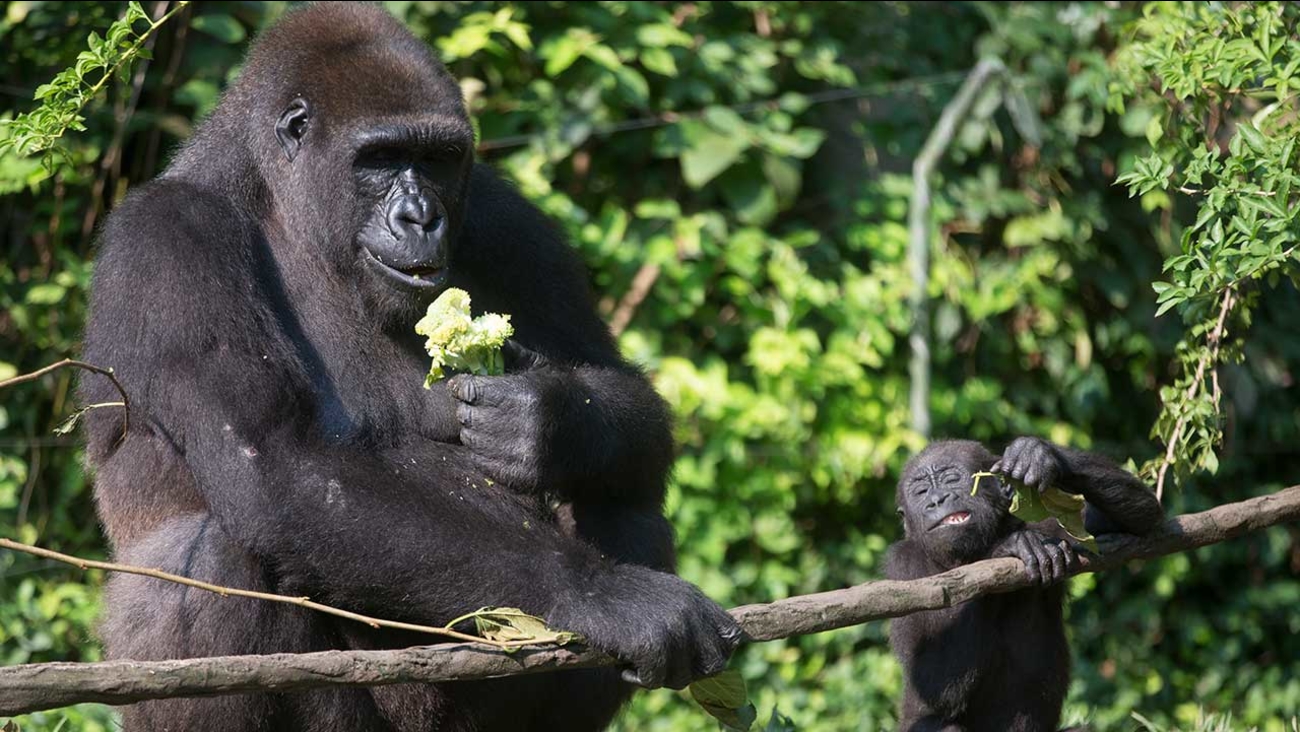 One of the Cincinnati Zoo's gorillas, Asha and her 1-year-old offspring Mona eat together in the Gorilla World exhibit in September 2015. (AP Photo/John Minchillo)

CINCINNATI, Ohio (WABC) -- The Cincinnati Zoo has temporarily closed its gorilla exhibit after a special zoo response team shot and killed a 17-year-old gorilla that grabbed and dragged a 4-year-old boy who fell into a moat.

Zoo officials said the boy fell after he climbed through a public barrier at the Gorilla World exhibit Saturday afternoon. He was picked up out of the moat and dragged by the gorilla for about 10 minutes.

Authorities said the child, who has not been identified, fell 10 to 12 feet. He was taken to Cincinnati Children's Hospital Medical Center where he is expected to recover. Hospital officials said they couldn't release any information on him.

Zoo Director Thane Maynard said the zoo's dangerous animal response team decided the boy was in "a life-threatening situation" and that they needed to put down the 400-pound-plus male gorilla named Harambe.

But he mourned the loss of the gorilla, which came to Cincinnati in 2015 from the Gladys Porter Zoo in Brownsville, Texas.

"We are all devastated that this tragic accident resulted in the death of a critically endangered gorilla," he said in a news release. "This is a huge loss for the zoo family and the gorilla population worldwide."

ABC News has obtained new video of the young boy who crawled into the gorilla enclosure at the Cincinnati Zoo.

We warn you - some of the images in the video may be disturbing to watch.

Witness Kim O'Connor shared video she and her family recorded with WLWT-TV of the boy and Harambe. The two appear in a corner of the exhibit while a voice yells "Somebody call the zoo!" and "Mommy's right here." Later, the two are shown in the moat. At one point, Harambe touches the boy's back and arms. A woman's voice is heard saying "Be calm, be calm."

The station reports more graphic parts of the video not shown include Harambe dragging the boy.

Two female gorillas also were in the enclosure when the boy fell in but zoo officials said only the male remained with the child.

It was the first time that the team had killed a zoo animal in such an emergency situation, Maynard said. He called it "a very sad day" at the zoo.

The area around the gorilla exhibit was closed off Saturday afternoon as zoo visitors reported hearing screaming.

The zoo will be open on Sunday but officials said the gorilla exhibit has been closed until further notice.

The zoo prides itself for its work in protecting endangered species, and has been part of successful captive breeding efforts in recent years in the effort to save the endangered Sumatran rhino.